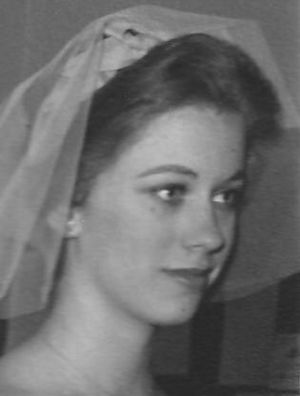 Connie Booth (born December 2, 1940, Indianapolis, Indiana) is an American actress, writer and psychotherapist. She has appeared on British and American television. She played Polly Sherman in the popular 1970s sitcom Fawlty Towers. Booth ended her acting career 1995. She began working as a psychotherapist in the late 1990s.

Booth married John Cleese in 1968. Their daughter, actress Cynthia Cleese, was born in 1971. The couple divorced in 1978. Booth has been married to critic John Lahr since 2000.

All content from Kiddle encyclopedia articles (including the article images and facts) can be freely used under Attribution-ShareAlike license, unless stated otherwise. Cite this article:
Connie Booth Facts for Kids. Kiddle Encyclopedia.