The Royal Exchange was heavily damaged in the Manchester Blitz and in the 1996 Manchester bombing. The current building is the last of several buildings on the site used for commodities exchange, primarily but not exclusively of cotton and textiles.

The cotton industry in Lancashire was served by the Manchester Royal Exchange which traded in spun yarn and finished goods throughout the world including Africa while the Liverpool Cotton Exchange traded in imported raw cotton. In the 18th century the trade was part of part the slave trade in which African slaves were transported to America where the cotton was grown and then exported to Liverpool where the raw cotton was sold. The first exchange opened in 1729 but closed by the end of the century. As the cotton industry boomed, the need for a new exchange was recognised. 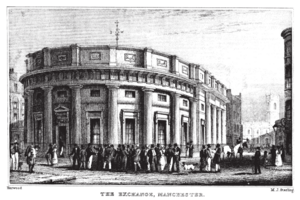 The Manchester Exchange in 1835

Thomas Harrison designed the new exchange of 1809 at the junction of Market Street and Exchange Street. Harrison designed the exchange in the Classical style. It had two storeys above a basement and was constructed in Runcorn stone. The cost, £20,000, was paid for in advance by 400 members who bought £50 shares and paid £30 each to buy the site. The semi-circular north façade had fluted Doric columns. The exchange room where business was conducted covered 812 square yards. The ground floor also contained the members' library with more than 15,000 books. The basement housed a newsroom lit by a dome and plate glass windows, its ceiling was supported by a circle of Ionic pillars spaced fifteen feet from the walls. The first-floor dining-room was accessed by a geometrical staircase. The exchange opened to celebrate of the birthday of George III in 1809. It also contained other anterooms and offices. As the cotton trade continued to expand, larger premises were required and its extension was completed in 1849.

The second exchange was replaced by a third designed by Mills & Murgatroyd, constructed between 1867 and 1874. It was extended and modified by Bradshaw Gass & Hope between 1914 and 1931 to form the largest trading hall in England. The trading hall had three domes and was double the size of the current hall. The colonnade parallel to Cross Street marked the its centre. On trading days merchants and brokers struck deals which supported the jobs of tens of thousands of textile workers in Manchester and the surrounding towns. Manchester's cotton dealers and manufacturers trading from the Royal Exchange earned the city the name, Cottonopolis.

The exchange was seriously damaged during World War II when it took a direct hit from a bomb during a German air raid in the Manchester Blitz at Christmas in 1940. Its interior was rebuilt with a smaller trading area. The top stages of the clock tower, which had been destroyed, were replaced in a simpler form. Trading ceased in 1968, and the building was threatened with demolition.

The building remained empty until 1973 when it was used to house a theatre company. The Royal Exchange Theatre was founded in 1976 by artistic directors — Michael Elliott, Caspar Wrede, Richard Negri, James Maxwell and Braham Murray. It was opened by Laurence Olivier on 15 September 1976. In 1979, the artistic directorship was augmented by the appointment of Gregory Hersov. 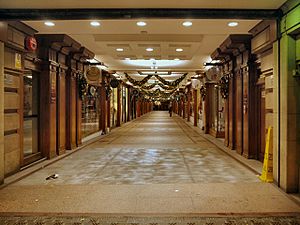 The Royal Exchange Arcade is a public route which passes under the building and contains retail units.

The building was damaged on 15 June 1996 when an IRA bomb exploded in Corporation Street less than 50 yards away. The blast caused the dome to move, although the main structure was undamaged. That the adjacent St Ann's Church survived almost unscathed is probably due to the sheltering effect of the stone-built exchange. Repairs took over two years and cost £32 million, a sum provided by the National Lottery. Whilst the exchange was rebuilt, the theatre company performed in Castlefield. The theatre was repaired and provided with a second performance space, the Studio, a bookshop, craft shop, restaurant, bars and rooms for corporate hospitality. The theatre's workshops, costume department and rehearsal rooms were moved to Swan Street. The refurbished theatre re-opened on 30 November 1998 by Prince Edward. The opening production, Stanley Houghton's Hindle Wakes was the play that should have opened the day the bomb was exploded.

In 1999, the Royal Exchange was awarded 'Theatre of the Year' in the Barclays Theatre Awards, in recognition of its refurbishment and ambitious re-opening season.

In January 2016 the Royal Exchange was awarded Regional Theatre of the Year by The Stage. In announcing the award The Stage said – “This was the year that artistic director Sarah Frankcom really hit her stride at the Royal Exchange. The Manchester theatre in the round’s output during 2015 delivered its best year in quite some time.” 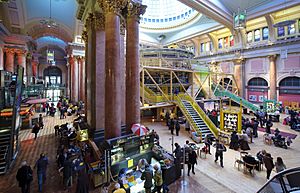 View towards the arches and theatre in the Great Central Hall

The exchange has four storeys and two attic storeys built on a rectangular plan in Portland stone. It was designed in the Classical style. Its slate roof has three glazed domes and on the ground floor an arcade orientated east to west. It has a central atrium at first-floor level. The ground floor facade has channelled rusticated piers and the first, second and third floors have Corinthian columns with entablature and a modillioned cornice. The first attic storey has a balustraded parapet while the second attic storey has a mansard roof. At the north-west corner is a Baroque turret and there are domes over other corners. The west side has a massive round-headed entrance arch with wide steps up and the first and second floor windows have round-headed arches. The third floor and first attic storey have mullioned windows. 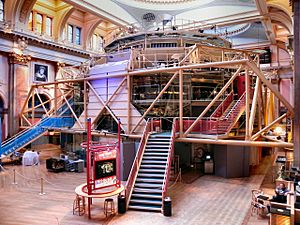 The theatre features a seven-sided steel and glass module that squats within the building's Great Hall. It is a pure theatre in the round in which the stage area is surrounded on all sides, and above, by seating. Its unique design conceived by Richard Negri of the Wimbledon School of Art is intended to create a vivid and immediate relationship between actors and audiences. As the floor of the exchange was unable to take the weight of the theatre and its audience, the module is suspended from the four columns carrying the hall's central dome. Only the stage area and ground-level seating rest on the floor. The 150-ton theatre structure opened in 1976 at a cost of £1 million amid some scepticism from Mancunians.

The theatre can seat an audience of up to 700 on three levels, making it the largest theatre in the round in Britain. There are 400 seats at ground level in a raked configuration, above which are two galleries, each with 150 seats set in two rows.

The Studio is a 90-seat studio theatre with no fixed stage area and moveable seats, allowing for a variety of production styles (in the round, thrust etc.) It acts as host to a programme of visiting touring theatre companies, stand-up comedians and performances for young people.

The Royal Exchange gives an average of 350 performances a year of nine professional theatre productions. Performances by the theatre company are occasionally given in London or from a 400-seat mobile theatre. The company performs a varied programme including classic theatre and revivals, contemporary drama and new writing. Shakespeare, Ibsen and Chekhov have been the mainstay of its repertoire but the theatre has staged classics from other areas of the canon including the British premieres of La Ronde and The Prince Of Homburg and revivals of The Lower Depths, Don Carlos and The Dybbuk. American work has also been important - Tennessee Williams, O'Neill, Miller, August Wilson - as has new writing, with the world premieres of The Dresser, Amongst Barbarians, A Wholly Healthy Glasgow and Port to its name.

The Royal Exchange also presents visiting theatre companies in the Studio; folk, jazz and rock concerts; and discussions, readings and literary events. It engages children of all ages in drama activities and groups and has performances including these children and teens. Performances include The Freedom Bird and The Boy Who Ran from the Sea.

The company has produced a very wide range of plays from 31 Shakespeare revivals to over 100 premieres; from neglected European classics to adaptations of famous novels. The many critically acclaimed and award-winning productions include:

In 2005, the Royal Exchange Theatre launched the Bruntwood Playwriting Competition to encourage a new generation of playwrights from the UK and Ireland. The competition had its roots in two regional competitions called WRITE which attracted over 400 entries. The first two competitions resulted in three festivals of new writing which showcased eight new writers one of which, Nick Leather, became writer in residence. The theatre produced his script, All the Ordinary Angels, in October 2005.

In 2006, 1,800 scripts were submitted for consideration. The winning entry was Ben Musgrave's Pretend You Have Big Buildings for which he received a prize of £15,000 and his play was performed as part of the Manchester International Festival 2007. In 2008 the Exchange and Bruntwood ran a second competition. Judges included Brenda Blethyn, Michael Sheen, Roger Michell and actor/director Richard Wilson. The £40,000 prize fund was split equally between Vivienne Franzmann for Mogadishu (main house and Lyric Hammersmith 2011), Fiona Peek for Salt (The Studio 2010), Andrew Sheridan for Winterlong (The Studio, 2011) and Naylah Ahmed for Butcher Boys.

The Royal Exchange building is reputed to be haunted. One ghost is reputed to be that of the actor and founding artistic director, James Maxwell. Another is a maternal Victorian lady, well dressed and with "a passion for drink". In 2006, the building was the subject of a paranormal investigation by the Most Haunted programme on Living TV.

All content from Kiddle encyclopedia articles (including the article images and facts) can be freely used under Attribution-ShareAlike license, unless stated otherwise. Cite this article:
Royal Exchange, Manchester Facts for Kids. Kiddle Encyclopedia.