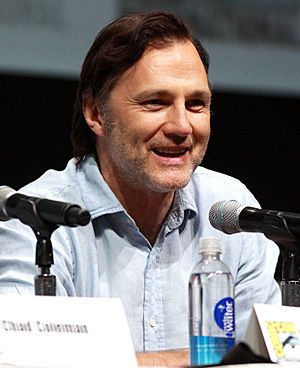 David Mark Morrissey (born 21 June 1964) is an English actor and film director. He was born in Liverpool. He decided to be an actor after he saw the film Kes. He became known in England after he started acting in One Summer in 1983 when he was 18. After making One Summer Morrissey went to the Royal Academy of Dramatic Art. He narrated the 2004 documentary The Boy That Michael Jackson Paid Off. Morrissey has directed six films. Recently he played as The Governor in the AMC original series The Walking Dead.

All content from Kiddle encyclopedia articles (including the article images and facts) can be freely used under Attribution-ShareAlike license, unless stated otherwise. Cite this article:
David Morrissey Facts for Kids. Kiddle Encyclopedia.