Sir John Mills, CBE (born Lewis Ernest Watts Mills, 22 February 1908 – 23 April 2005) was an English actor who appeared in more than 120 films in a career spanning seven decades. On screen, he often played people who are not at all exceptional, but become heroes because of their common sense, generosity and good judgment. He received an Academy Award for Best Supporting Actor for his work in Ryan's Daughter (1970).

Mills was born in Felixstowe, Suffolk, but grew up in Norfolk. He spent his early years in the village of Belton where his father was the headmaster of the village school. He first felt the thrill of performing at a concert in the school hall when six years old.

He lived in a modest house in Gainsborough Road Felixstowe until 1929. His older sister was Annette Mills, remembered as presenter of BBC Television's Muffin the Mule (1946–55).

He was educated at Balham Grammar School in London, Sir John Leman High School in Beccles, Suffolk and Norwich High School for Boys, where it is said that his initials can still be seen carved into the brickwork on the side of the building in Upper St. Giles Street. Upon leaving school he worked as a clerk at a corn merchants in Ipswich before finding employment in London as a commercial traveller for the Sanitas Disinfectant Company.

In September 1939, at the start of the Second World War, Mills enlisted in the British Army in the Royal Engineers. He was later commissioned as a Second Lieutenant, but in 1942 he received a medical discharge because of a stomach ulcer. 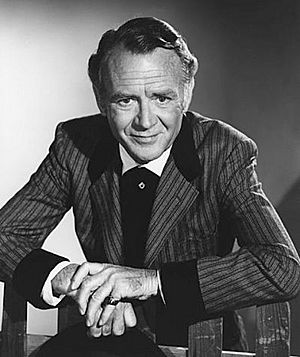 In the years leading up to his death, he appeared on television only on special occasions, his sight having failed almost completely by 1992. After that, his film roles were brief cameos.

He died aged 97 on 23 April 2005 in Denham, Buckinghamshire, following a chest infection. His wife died on 1 December 2005. They are buried in St. Mary the Virgin Churchyard, Denham.

Mills was appointed a Commander of the Order of the British Empire (CBE) in 1960. In 1976 he was knighted by the Queen.

In 1999, at 91 years of age, Mills became the oldest joining member of the entertainment charitable fraternity, the Grand Order of Water Rats.

In 2002, he received a Fellowship of the British Academy of Film and Television Arts (BAFTA), their highest award, and was named a Disney Legend by the Walt Disney Company.

All content from Kiddle encyclopedia articles (including the article images and facts) can be freely used under Attribution-ShareAlike license, unless stated otherwise. Cite this article:
John Mills Facts for Kids. Kiddle Encyclopedia.