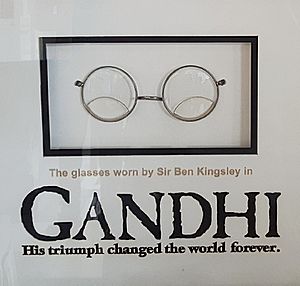 Gandhi is a 1982 British-Indian-American biographical movie based on the life of Indian activist Mohandas Gandhi. It is directed and produced by Richard Attenborough. It was written by John Briley and some of it by Steven Spielberg.

Attenborough said that the movie was his dream project.

All content from Kiddle encyclopedia articles (including the article images and facts) can be freely used under Attribution-ShareAlike license, unless stated otherwise. Cite this article:
Gandhi (movie) Facts for Kids. Kiddle Encyclopedia.