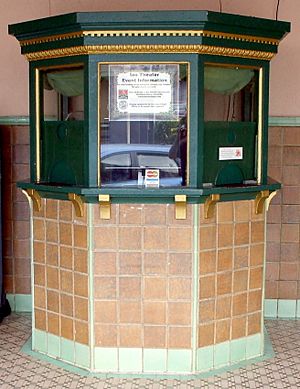 A box office is a place where tickets are sold to the public. These tickets let people into a theater to see an event. In the movie industry, the term is most often used to mean the amount of money a movie makes by the selling of tickets. The term can also mean things which affect the amount a movie earns.

Box office business can be measured in terms of how many people see a movie. It can also be measured by how much money is earned by selling tickets. The estimate of these amounts and analysis of them is very important to the movie industry. It is often something that is important to fans as well.

Some people think that the movie industry is concerned too much with this. They say profit is more important to movie studios than making movies as a form of art. Understanding how different types of movies earn money affects the how other movies are made and paid for. If a certain type of movie often has a large box office, studios are more likely to make that type of movie. Some types of movies earn more when they are released at certain times of the year. Studios use this information to plan when to release certain movies. For example:

There are many websites that show box-office number. Two of these are ShowBIZ Data and Box Office Mojo.

The following is movie industry specific terminology. It is defined by Box Office Mojo. For movies released in North America, box office figures are usually divided into two categories. The first is domestic. This is the amount a movie earns in the United States and Canada. The second is foreign which includes all other countries. The Weekly box office is the amount a movie makes from Friday through Thursday. The "movie week" starts on Friday because most movies are released on that day. A large part of this is the weekend box office. It is defined as the amount earned on Friday, Saturday and Sunday. The first weekend after a movie is released is the opening weekend. The amount made by a movie on its opening weekend is what is often reported.

Theaters is the number of theaters in which the movie is being shown. Because a theater may show a movie on more than one screens, the total number of screens is also used. If a movie is released in over 600 theaters, it is said to be wide release. If the number is less than 600, it is a limited release. A limited release may be as small as one theater or 1-2 theaters in New York City and Los Angeles, California. A movie may start with a limited release and later get a wide release. Little Miss Sunshine is an example of this.

All content from Kiddle encyclopedia articles (including the article images and facts) can be freely used under Attribution-ShareAlike license, unless stated otherwise. Cite this article:
Box office Facts for Kids. Kiddle Encyclopedia.