Telford is a large new town in the borough of Telford and Wrekin and ceremonial county of Shropshire, England, about 13 miles (21 km) east of Shrewsbury, and 30 miles (48 km) north west of Birmingham. With an estimated population (for the borough) of 170,300 in 2010 and around 155,000 in Telford itself, Telford is the largest town in Shropshire, and one of the fastest-growing towns in the United Kingdom.

It is named after civil engineer Thomas Telford, who engineered many road and rail projects in Shropshire. The town was put together in the 1960s and 1970s as a new town on previously industrial and agricultural land and smaller towns. Like other planned towns of the era, Telford was created from the merger of other, smaller settlements, most notably the towns of Wellington, Oakengates, Madeley and Dawley. Many of the New Town's newer inhabitants were originally from Birmingham or Wolverhampton.

Telford Shopping Centre, a modern shopping mall, was constructed at the new town's geographical centre, along with an extensive Town Park. The M54 motorway was completed in 1983, improving the town's road links with the West Midlands conurbation.

On Telford's southern boundaries is the Ironbridge Gorge, a scenic tourist destination and UNESCO World Heritage Site. The town advertises itself as "The Birthplace of Industry", due to it having Coalbrookdale and other places in the Ironbridge Gorge area, within its boundary. These areas are internationally recognised as being important to the Industrial Revolution, and being to a large extent constructed on the Shropshire Coalfield. 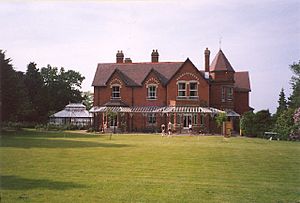 Early settlement in the area was thought to be on the land that sloped up from the Weald Moors (an area north of the town centre) towards the line along which the Roman Watling Street was built. Farmland surrounded three large estates in the 10th century, namely Wellington, Wrockwardine and Lilleshall.

From the 13th century there was urban development in Wellington and Madeley, where Wenlock Priory founded a new town. Six monastic houses, founded in the 11th and 12th centuries, had large interests in the area's economic growth. They collectively acquired almost half of the area, and profited from coal and ironstone mines and iron smithies on their estates.

The Beatties department store at the west end of Telford Shopping Centre, which was renamed House of Fraser in early 2007. 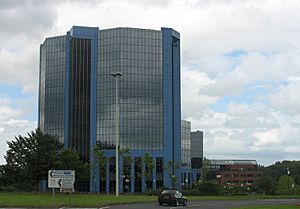 The Minister proposed an extension of 12,000 acres (49 km2) in 1968 (taking in the historic area of Ironbridge Gorge), which saw objections and a public inquiry take place of "land lying within the urban districts of Oakengates and Wellington and the rural districts of Shifnal and Wellington". This Order also renamed the new town Telford, after the Scottish-born civil engineer Thomas Telford who, in 1787, became Surveyor of Public Works for Shropshire. Other suggested names at the time were Dawelloak and Wrekin Forest City.

Most of the infrastructure was constructed from the late 1960s and throughout the 1970s with the major housing and commercial development occurring over three decades up to the early 1990s when the Development Corporation was wound up to be replaced by Commission for the New Towns, later English Partnerships, and most of the property was handed over to the then Wrekin District Council. Telford was now 25 years old and was firmly established as one of the most important towns in the region.

In 1983, after fierce opposition and three public enquiries, the M54 motorway was completed, connecting the town to the M6 and thence the rest of the UK's motorway network. Other major roads are the A5, A518 and A442, which is commonly known as the Eastern Primary or EP, and is officially branded Queensway.

Many of the new town's residents were originally from the West Midlands conurbation, which includes Wolverhampton, Birmingham, Dudley and Walsall. The vast majority of the council house tenants in Telford were rehoused from inner city Birmingham. Some individuals still refuse to put Telford in their address, instead using the original local name (such as Wellington or Dawley) and often citing the existence of Town Councils as support for the argument "you can't live in a town in a town," e.g. Wellington(Town) Telford(Town). The new town's residents who arrived in the 1960s and 1970s earned the unwanted nickname "overspill" from people living in the existing towns and villages.

In 2007, a £250 million regeneration plan for the town centre was announced, which will include the pedestrianisation of the road surrounding the shopping centre, and the creation of new cafés, bars and shops which will lead to 1,750 new jobs. The reason for this expansion is that the original "centre" was only ever a shopping place with no real heart (See Shropshire Star 3 June 2004). Since the "centre" closed early evening, there was no nightlife at all in the area, the only major local entertainment areas being in Oakengates and Wellington.

The Wrekin overlooks the town

Telford town centre lies about 21 kilometres (13 mi) east/south-east of Shrewsbury and 24 kilometres (15 mi) north-west of Wolverhampton. The town comprises 7,803 hectares (30.13 square miles) and its southern and eastern parts, between the Severn Gorge and Donnington Wood, include the East Shropshire coalfield. North and north-west Telford lie beyond the coalfield's boundary fault on sandstone beds which, along with other Triassic formations, prevail over much of the North Shropshire plain. The town centre stands on a watershed, with land to the south draining towards the River Severn, and to the north the land slopes gently down towards the Weald Moors. The town is dominated by the Wrekin, a large hill of 407 m (1335 ft), located south-west of Wellington, straddling the border with the unitary Shropshire Council (before the latter's creation in 2009 the borough of Shrewsbury and Atcham). 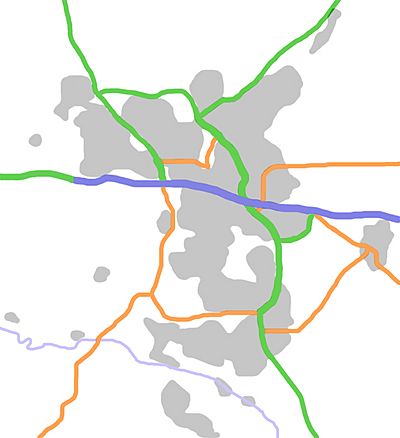 Telford's population is predominantly White, comprising 93.8% of the population. The next largest ethnic group is those of Asian descent, comprising 3.3% of the population, which is again less than the West Midlands at 8.0%, and England at 5.3%. However, the town and borough remains comparatively more ethnically diverse than the ceremonial county, with South Shropshire for example being 97.8% white. 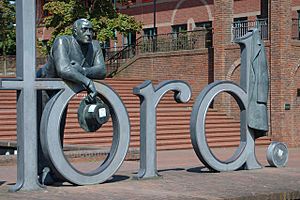 Thomas Telford statue in the town centre, by the Law Courts

The commercial centre of the town is the aptly named Telford Town Centre, located off Junction 5 of the M54 motorway, completed in the 1980s. It is home to the administrative headquarters of Telford & Wrekin council, which are now based at Addenbrook House on Ironmasters Way, after moving from Civic Offices in December 2012. The large Telford Shopping Centre (and the accompanying Town Park), various office blocks, such as the blue office towers (Telford Plaza), and the Windsor Life building. The Forge retail park and a large Odeon Cinema are also located in the area. Telford also houses one of the Midland's few ice skating rinks near the newly built Telford International Centre (TIC). The TIC comprises a number of hall and event spaces. It holds parties, conferences, concerts and is the current home of the UK Snooker Championship in December.

A major Shropshire landmark, also now part of Telford, is The Iron Bridge, located in Ironbridge. It was the first bridge of its size in the world made out of cast iron. In the same area is the Ironbridge Gorge, a UNESCO World Heritage Site. The most important landmark in the area is The Wrekin. There is also the Lilleshall Monument erected to the Duke of Sutherland, which has recently been restored. 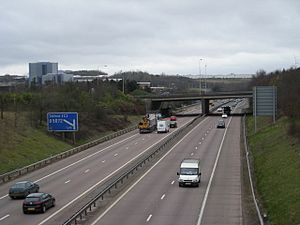 The M54 shown here near Junction 5 for Telford Centre, which is visible in the background to the left.

Telford is situated at the terminus of the M54 motorway, a spur of the M6 linking the town with Wolverhampton and the West Midlands, and on the A5 road between Shrewsbury and Cannock.

The town has three railway stations on the Shrewsbury to Wolverhampton Line: Wellington, Oakengates and Telford Central. A new direct train service to London was launched by Wrexham & Shropshire in 2008. The venture however proved unprofitable and ceased to operate on Friday 28 January 2011, leaving Shropshire as the only English county without a direct train link to London; that is until Virgin Trains launched a direct Shrewsbury to London service in December 2014 In addition, there are two further stations isolated from the national network, Spring Village and Horsehay & Dawley, at Telford Steam Railway, situated at Horsehay.

Telford's rapidly growing population still has a relatively low car ownership. In 2004 Telford & Wrekin council was awarded 'Beacon Status' for improving access to public transport. Being a new town with a planned transport infrastructure, the town features relatively few traffic problems, in comparison to the urban areas of Birmingham or medieval streets of Shrewsbury. The M54 reduces through-traffic on local roads, and the A442 Queensway acts as a north-south artery road.

All content from Kiddle encyclopedia articles (including the article images and facts) can be freely used under Attribution-ShareAlike license, unless stated otherwise. Cite this article:
Telford Facts for Kids. Kiddle Encyclopedia.