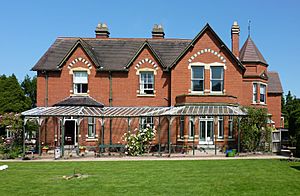 View of Sunnycroft from the lawn

Sunnycroft is a Victorian suburban villa, located in Wellington, Shropshire.

Located in the market town of Wellington, Shropshire, England, and owned by the National Trust as one of their more unusual properties.

Suburban villas were almost 'country estates in miniature' that attempted to emulate upper class mansions on a middle class budget. Many have either been modernised, renovated or refurbished out of recognition over the last 60 years or so or have been demolished and replaced with later housing, converted into offices or residential care homes, or have been broken up into flats and smaller residences.

Sunnycroft remains intact, complete with the original interior fixtures and fittings, many of which are still in place and therefore has a unique character and intimacy that is often lacking from larger properties but very evocative of its time and place.

It is located close to the town centre in Wellington, on the B5061 Holyhead Road, originally the Shrewsbury to London road, and formerly part of Watling Street the Roman road from London to Wroxeter.

Sunnycroft was built in 1880, and extended in 1899. Uniquely the house remained in the same family from its completion in 1899, until it was bequeathed to the National Trust in 1997.

The National Trust summarises Sunnycroft as:

All content from Kiddle encyclopedia articles (including the article images and facts) can be freely used under Attribution-ShareAlike license, unless stated otherwise. Cite this article:
Sunnycroft Facts for Kids. Kiddle Encyclopedia.