Wellington is a town in the unitary authority of Telford and Wrekin and ceremonial county of Shropshire, England and now forms part of the new town of Telford, with which it has gradually become contiguous. The total town population of Wellington was 25,554 in 2011 making it by far the largest of the borough towns and the third largest town in Shropshire when counted independently from Telford. However the town centre serves a greater area of approximately 60,000.

Its name is most likely derived from that of a Saxon settler - Weola - whose farmstead would have been located somewhere in the centre of town, possibly near The Green. A church has stood near that site for almost 1000 years and a priest is mentioned in the Domesday Book. The original churchyard still remains. A new church, designed by George Steuart, was built in 1789.

Wellington's first market charter was granted to Giles of Erdington, lord of the manor, and is dated 1244 (See citation in external links) and a market still exists today. The market had an open-sided market hall by 1680 - and possibly much earlier - but this was dismantled c.1805 (See Citation in external links). In 1841, a market company formed to purchase the market rights from Lord Forester in 1856. Several years later in 1848, the company built a town hall with the butter market below, creating a permanent covered home for traders.

In 1642 King Charles I stayed overnight 'in the environs of Wellington (i.e. not in the town itself) when on his way from Newport to Shrewsbury to rally support for his cause (and to exchange cash for honours), and while here he made his 'Wellington Declaration' in which he said that he would uphold the Protestant Religion, the Laws of England, and the Liberty of Parliament.

The second Shropshire Olympian Games, organised by celebrated Olympic revivalist Dr William Penny Brookes, were held in Wellington in May 1861. 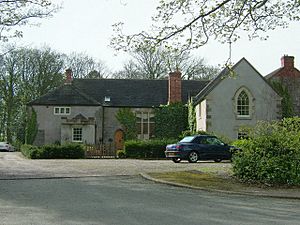 To the north-east of the town is the site of Apley Castle, originally a fourteenth-century fortified manor house, the remains of which were converted into a stable block with the building of a grand Georgian house, which was itself demolished in the 1950s. The surviving stable block has been converted into apartments and retains some medieval features. 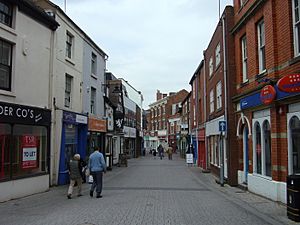 Another street view of the pedestrianised centre of Wellington

The creation of Telford

Dawley New Town was designated by the Government in 1963, and was expanded to encompass Wellington in 1968 under the new name of Telford, named for the great engineer and first county surveyor of Shropshire, Thomas Telford. The creation of Telford has divided opinion in Wellington ever since, with some celebrating the jobs and investment it brought to the area and others bemoaning the negative impact on Wellington's own economy – as well as its status and sense of identity. The development of Telford Town Centre since the 1970s has hit Wellington's retail centre hard. In addition, moves such as the renaming of the local football team from Wellington Town to Telford United highlighted to many that Wellington was being erased as a town in its own right.

Local politics left Wellington in conflict with Wrekin District (now Telford & Wrekin) Council for many years, with claims and counter claims of neglect. In more recent years, however, the Council has started making heavy investment to make improvements to the town. Chief amongst these has been the redeveloped Wellington Civic and Leisure Centre near the centre of the town, which has brought together the library, town council, swimming pool and gymn, along with a new registry office. 200 borough council officers are also located at the new complex. 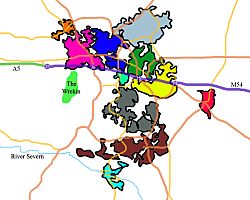 Wellington shown within Telford in Purple.

The Wrekin, one of Shropshire's most famous landmarks, provides Wellington with a rolling green backdrop to the south-west. Located just two miles from the centre of the town, it brings tens of thousands of walkers and cyclists to Wellington every year.

Located in the town's Victorian market hall, Wellington Market operates four days a week and houses over 100 stalls selling everything from local cheese to pipe tobacco. A Farmers' Market also takes place on the fourth Saturday of the month, bringing together several Shropshire food producers and retailers in the market's historic home of Market Square. Local volunteers are working with the Market Company to expand the monthly market and raise its profile.

A short walk from the centre of the town is Sunnycroft, a Victorian villa and mini-estate now owned and run by the National Trust.

Wellington is also home to the Belfrey Theatre an amateur venue run by the Wellington Theatre Company which puts on an annual season of plays and other shows.

Wellington has started to build a reputation for community-led arts and heritage events in recent years. The area's music and theatre groups host performances throughout the year, and amongst other regular events are craft markets at both Belmont Hall and Christ Church (first Saturday of the month).

In March, the town marks Charter Day, when the 1244 charter is delivered by a messenger on horseback. A jury then convenes in the Market Square to appoint the town crier, ale taster and market clerk for the year ahead.

During the summer, around 40 events take place in and around the town, including the historically-inspired Midsummer Fayre, the town carnival and Lions Day at Bowring Park, and the Wellington Walking Festival. Sounds in The Square brings live music to the heart of the town across weekends in July and August, and various concerts and fetes complete the programme.

Autumn kicks off with The Wrekin Barrel Race, when teams race to carry a nine-gallon beer barrel to the top of The Wrekin hill. In October, The Wellington Literary Festival heralds a month-long series of talks and workshops with nationally-known authors and broadcasters, alongside local writers and historians. 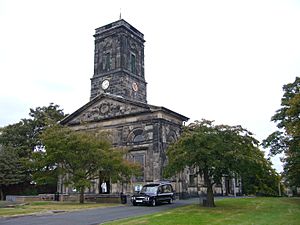 All Saints' Church in the centre of Wellington. Built in 1790. 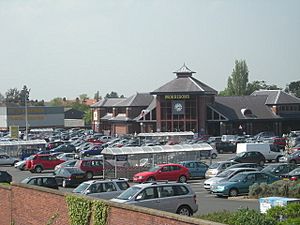 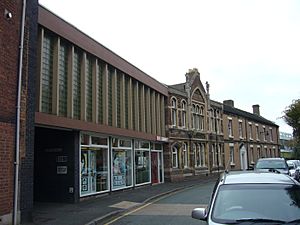 Wellington Library, where the poet Philip Larkin once worked. The alley to the left of the photo is sign-posted "Larkin Way"

Wellington can be reached more easily than many Shropshire towns, thanks to its excellent road links, its centrally located railway and bus stations, and its position on routes 45 and 81 of the National Cycle Network.

Wellington railway station was built in 1849 and has three platforms, served by Arriva Trains Wales, London Midland and Virgin Trains (West coast) providing northbound trains towards Shrewsbury and Wales, and southbound trains to the West Midlands. One of the platforms is a bay platform, which sees little use at present. Additionally, from 2008–2011 the town had a through train service to London Marylebone, the first for almost 40 years.

In 1867, a branch line was opened to connect the town with Market Drayton. The Wellington and Market Drayton Railway operated for just under one hundred years before closure under the Beeching reforms in 1963. The line remained open for goods only services until 1967, when this service was also withdrawn. The track was lifted in the early 1970s.

There were also railway links to Much Wenlock and Stafford, both closed in the late 1960s.

A goods only link to a rail head at Donnington, on part of the former Wellington to Stafford line, has been re-opened. The concept of re-establishing the railway line from Wellington Leegomery, Hadley, Trench, Donnington, through Newport, Gnosall and on to Stafford, for a lot of Salopians is something that must be done.

Wellington is located at the western terminus of the M54 motorway Junction 7 and has good bus services making it one of the most accessible towns in Shropshire.

A number of community organisations are active in the town. Wellington's 'Walkers are Welcome' Group, for instance, organises regular walks around the area in addition to the annual Walking Festival, and Wellington H2A promote arts and heritage in the town through a range of events. Local history and heritage are also promoted by Wellington History Group and Wellington Civic Society. A twinning group exists to maintain links with Wellington's twin town of Chatenay-Malabry in France.

Amongst current community projects are the Peace Garden, started by local nonagenarian George Evans, and the ambitious project to reopen the former Clifton Cinema as a multi-purpose community-owned arts centre, since the building was vacated by previous occupants Dunelm in 2012.

All content from Kiddle encyclopedia articles (including the article images and facts) can be freely used under Attribution-ShareAlike license, unless stated otherwise. Cite this article:
Wellington, Shropshire Facts for Kids. Kiddle Encyclopedia.