Market Drayton is a market town and electoral ward in the north of Shropshire, England, close to the Cheshire and Staffordshire borders. It is on the River Tern, and was formerly known as "Drayton in Hales" (c. 1868) and earlier simply as "Drayton" (c. 1695).

Market Drayton is on the Shropshire Union Canal and on Regional Cycle Route 75. The A53 road by-passes the town, which is between Shrewsbury and Newcastle-under-Lyme. 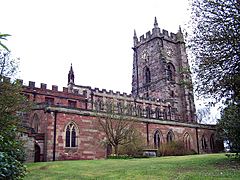 St. Mary's Church from the south

The church stands on the top of a prominent outcrop of red sandstone rock above the River Tern. The Domesday Book describes "A Priest in Drayton", and there was likely a wooden Saxon church on the same site prior to the construction of the present Norman stone building, which dates to 1150.

In 1201 Pope Innocent III forbade the weekly market which had traditionally taken place in the churchyard after the Sunday morning service. As a result, the market moved northwards a few hundred yards, to its present site in the town. In the 1320s major building work was undertaken in the church. In the Georgian era galleries and box pews were added, but in the 1880s these were removed.

The church boasts some fine stained glass. The west window, depicting Queen Victoria, is by Shrigley and Hunt. The east window, showing the Resurrection of Jesus, is by Charles Eamer Kempe (1837–1907). Other Kempe windows are in the south west corner of the nave, depicting Jesus healing the blind near Jericho, raising Lazarus from the dead, and healing the paralytic at Bethesda, and at the north east corner: the flight into Egypt and Presentation of Jesus at the Temple.

The Corbet family, who were lords of the manor and church patrons, are memorialised in several locations in the church. A brass plaque with the Corbet coat of arms serves as a monument to Rowland Corbet (d.1560). Above this is a monument to Dame Alice Corbet (d.1682), who bore twenty children.

The original organ was installed in 1805, and was replaced after 1866. At one time the current organ blocked the view of the altar, but the pipes have since been moved to behind the reredos and the console to the north side of the chancel.

The exterior of the church, largely rebuilt and restored in the late 19th century, consists of red sandstone ashlar with some grey sandstone in tower. The angle-buttressed tower features battlements that were added in the 16th century and crocketed corner pinnacles from the 19th century. St Mary's has a peal of eight bells, the oldest of which dates to 1700. The tenor bell weighs 1,960 lb (890 kg) and the treble 616 lb (279 kg).

The Norman arch over the main west door is the only remaining part of the original stone church. Early in the 14th century the doorway was incorporated into the superstructure; the large west window above the door features ornate and elaborately patterned stonework typical of the period. Robert Clive, who attended the nearby Old Grammar School in the 1730s, is said to have once climbed out onto one of the tower's carved gargoyles.

The chapel has been long associated with the owners of Buntingsdale Hall - especially the Bulkleys, the Mackworths, the Tayleurs and again the Macworths. The part converted into the choir vestry lies over the old family vaults. The paintings by Parry (late 20th century) depict Man's search for God and (on the reverse) Seasons of Faith.

The church contains a "Chapel of the Resurrection", a side chapel dedicated, refurnished and panelled in memory of the parish war dead of both of the 20th century's world wars. It has a huge brass memorial tablet unveiled after the First World War and a set of kneelers bearing service badges of the regiments in which those commemorated served. To the right of the main chancel arch are plaques to Major Charles Egerton Hugh Harding (died 1917) and Second Lieutenant John Aleric Everard Upton (killed in the Battle of the Somme 1916), while on the chancel's south wall is a plaque to Lieutenant Charles Henry Lycett Warren, killed at the Siege of Lucknow 1857.

Ancient local sites include Audley's Cross, Blore Heath and several Neolithic standing stones. "The Devil's Ring and Finger" is a notable site 3 miles (5 km) from the town at Mucklestone. These are across the county boundary in neighbouring Staffordshire. 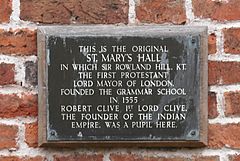 The Old Grammar School, in St. Mary's Hall, directly to the east of the church, was founded in 1555 by Rowland Hill, the first Protestant Mayor of London. Former pupils include Robert Clive, and a school desk with the initials "RC" may still be seen in the town.

The great fire of Drayton destroyed almost 70% of the town in 1651. It was started at a bakery, and quickly spread through the timber buildings. The buttercross in the centre of the town still has a bell at the top for people to ring if there was ever another fire.

Other notable landmarks in the area include: Pell Wall Hall, Adderley Hall, Buntingsdale Hall, Salisbury Hill, Tyrley Locks on the Shropshire Union Canal and the Thomas Telford designed aqueduct. Fordhall Farm has 140 acres (0.57 km2) of community-owned organic farmland located off the A53 between the Müller and Tern Hill roundabouts. The farm trail is open to the public during farm shop opening hours, and on the path is the site of Fordhall Castle, an ancient motte and bailey structure which overlooks the River Tern valley.

To the south-east near the A529 an 18th-century farmhouse stands on the site of Tyrley Castle, which was probably built soon after 1066 and later rebuilt in stone in the 13th century.

Currently, Arriva provides a local bus service to Shrewsbury, Newcastle-under-Lyme and Hanley (as services 64 and 164). Beginning on 7 September 2012 Bennett's Travel Cranberry Ltd run an evening service 164 to Hanley on Fridays and Saturdays with a day service to Newcastle under Lyme on Sunday. Arriva provide services 341/342 to Wellington from Monday to Saturday.

Shropshire Council also run a number of bus services under the 'ShropshireLink' brand in addition to the 301 and 302 Market Drayton Town Services.

Market Drayton is twinned with:

Grove School is a large secondary school of about 1,100 pupils, all of whom live within 12 miles (19 km) of the town.

Market Drayton Tennis Club is also based at Greenfields and has three all weather floodlit courts; the club plays in a number of Shropshire leagues.

Thomas Povey, the colonial civil servant and friend of Samuel Pepys, was a Londoner, but a branch of his family lived at Woodseaves, near Market Drayton; the most prominent member of this branch of the family was Sir John Povey, (1621–1679) Lord Chief Justice of Ireland 1673–79.

Nearby at Styche Hall is the birthplace of Robert Clive, first Lord Clive, "Clive of India", (1725–1774), part of whose schooling was in the Grammar School then in Market Drayton. The Georgian house, designed by Sir William Chambers, the architect of Somerset House, replaced the half-timbered house where Clive was born. It was built for his father and paid for by Clive from the income from his Indian career.

The 1930s British fascist leader Sir Oswald Mosley (1896 – 1980) was allegedly born nearby at Betton Hall, the home of his mother's parents, although officially established to have been born in London. When his parents separated, Oswald and his brother went with their mother to live in Smithfield Road.

Mosley was deeply ashamed of the family's reduced circumstances and he did everything to hide the years in Drayton. Their middle class status contrasted with the huge estate of his paternal grandparents in Staffordshire. Years later, following the death of their mother, he obtained her diaries from his brother and burned them.

All content from Kiddle encyclopedia articles (including the article images and facts) can be freely used under Attribution-ShareAlike license, unless stated otherwise. Cite this article:
Market Drayton Facts for Kids. Kiddle Encyclopedia.