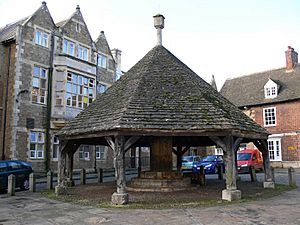 A buttercross in Oakham 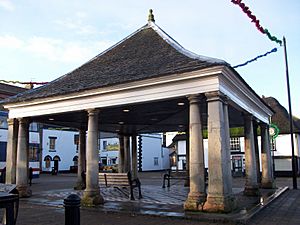 The 17th-century buttercross in Whittlesey, Cambridgeshire.

A buttercross, also known as butter cross, is a type of market cross associated with English market towns and dating from medieval times. Its name originates from the fact that they were located at the market place, where people from neighbouring villages would gather to buy locally produced butter, milk and eggs. The fresh produce was laid out and displayed on the circular stepped bases of the cross.

Their design varies from place to place, but they are often covered by some type of roof to offer shelter, although the roofs were mostly added at a much later date than the original cross they cover.

Instances in English settlements include:

All content from Kiddle encyclopedia articles (including the article images and facts) can be freely used under Attribution-ShareAlike license, unless stated otherwise. Cite this article:
Buttercross Facts for Kids. Kiddle Encyclopedia.