Dawley is a small town in the borough of Telford and Wrekin and ceremonial county of Shropshire, England. Today, it forms part of the new town of Telford, which was originally, in 1963, going to be named 'Dawley New Town' before it was decided in 1968 to name the town 'Telford', after the engineer and road-builder Thomas Telford.

Dawley is one of the older settlements in Shropshire, being mentioned in the Domesday Book (1086). It is divided into Dawley Magna ("Great Dawley") and Little Dawley (also shown as Dawley Parva ("Little Dawley") on older maps).

Dawley is mentioned in the Domesday Book and is therefore one of the older settlements in Shropshire.

There was a castle in Dawley, but it was demolished around 1648. The site is unknown, although the Castle Pools (on the old quarry site) and Castle Ironworks (built by the Darby family, one of whom commissioned the world-famous Iron Bridge) possibly indicate the general area where it may have stood. Prior to the landscaping which followed the creation of Telford New Town, extensive ruins were detectable next to the Castle Pools and are shown on old maps as being the location of the castle, but, in the 1980s, the whole area was buried under thick topsoil and planted with trees. Ironbridge is a short distance away.

Dawley was, for over three centuries, a mining town, both for coal and ironstone. Clay extraction, for local industrial-pipe factories, brickyards and the pottery industry, has been a major influence on the landscape. The mining had an important impact on the culture. The Springwell Pit Disaster in 1872 cost eight men and boys their lives.

Prior to large-scale levelling as part of the development of Telford New Town, the area was covered by clay mounds and large clay pits that dominated the landscape, to the extent that they formed points of reference for the locals. There is still a local clay-pipe factory in the adjacent Doseley village; grey clay predominates on the immediate outskirts of Dawley.

The adjacent village of Horsehay was the site of a bridge and later a crane fabrication factory that exported around the world. The bridge over Victoria Falls is said to have been built there. Telford Steam Railway trust is located across the road from the former factory site.

On Monday, 7 June 2010, Dawley had become subject to a lot of media attention because some locals had recreated the 'Hollywood' sign on a noticeable bank on Paddock Mount but with Dawley instead of Hollywood. The Shropshire Star had a full-page spread article on that day's evening edition to honour the effort made by the locals. As of midday on Tuesday, 8 June 2010, over 1000 Telfordians had joined a Facebook group showing support for the sign, acknowledging the efforts of its creators, and in protest against the controversial redevelopment of the mount to move the Phoenix Academy (now the Telford Langley School) there.

Dawley is famed for its dialect, which includes some quite unique words, including "bist", presumably from the German meaning "are". However, the dialect is largely lost. Along with the dialect were various conventions and traditions, notably the "pig on the wall". Traditionally, Dawley residents would show their support for The Dawley Prize Band or other civic marches by placing their pigs on their walls. The pig also features in the dialect, with a romantic phrase apparently being "I wudna swop thee for a big black pig!" 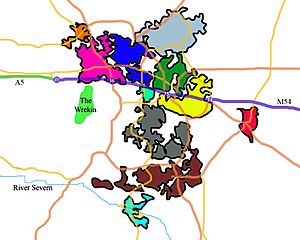 Dawley and Stirchley shown within Telford in Grey.

Dawley has a street-market every Friday. Dawley town centre consists of a single pedestrianised street that was previously the main route from Bridgnorth in the south to Wellington in the north. The area around Dawley, not covered by Telford New Town, is rural and provides extensive opportunities for walking. The Ironbridge Gorge and The Wrekin are both pleasant walks from Dawley.

All content from Kiddle encyclopedia articles (including the article images and facts) can be freely used under Attribution-ShareAlike license, unless stated otherwise. Cite this article:
Dawley Facts for Kids. Kiddle Encyclopedia.