Coalbrookdale is a village in the Ironbridge Gorge in Shropshire, England. It is in an area of great significance in the history of industrialisation. This is where iron ore was first smelted by Abraham Darby using easily mined "coking coal".

The coal was drawn from drift mines in the sides of the valley. As it contained far fewer impurities than normal coal, the iron it produced was of a superior quality. Along with many other industrial developments that were going on in other parts of the country, this discovery was a major factor in the growing industrialisation of Britain. It was the Industrial Revolution.

Today, Coalbrookdale is home to the Ironbridge Institute, a partnership between the University of Birmingham and the Ironbridge Gorge Museum Trust offering postgraduate and professional courses in heritage. 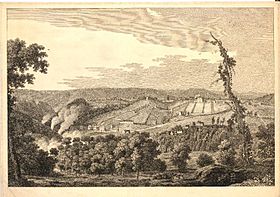 In 1709, Abraham Darby I rebuilt Coalbrookdale Furnace, and used coke as his fuel. His business was that of an ironfounder, making cast-iron pots and other goods, an activity in which he was particularly successful because of his patented foundry method, which enabled him to produce cheaper pots than his rivals. Coalbrookdale has been claimed as the home of the world's first coke-fired blast furnace; this is not strictly correct, but it was the first in Europe to operate successfully for more than a few years.

Iron was now being made in large quantities for many customers. In the 1720s and 1730s, its main products were cast-iron cooking pots, kettles and other domestic articles. It also cast the cylinders for steam engines, and pig iron for use by other foundries.

In the late 18th century, it sometimes produced structural ironwork, including for Buildwas Bridge. This was built in 1795. The year after that, in 1796, Thomas Telford began a new project, the Longdon aqueduct. It carried the Shrewsbury Canal over the River Tern and was supported by cast-iron columns. Charles Bage designed and built the world's first multi-storey cast-iron-framed mill. It used only brick and iron, with no wood, to improve its fire-resistance. In the 19th century ornamental ironwork became a speciality.

In the century after the Old Blast Furnace closed, it became buried. There was a proposal for the site to be cleared and the furnace dismantled, but fortunately, it was decided to excavate and preserve it. It and a small museum were opened to celebrate 250 years of the Company in 1959. This became part of a larger project, the Ironbridge Gorge Museums. Its Museum of Iron is based in the Great Warehouse constructed in 1838 and Ironbridge Institute is based in the Long Warehouse, these two form the sides of an open space.

All content from Kiddle encyclopedia articles (including the article images and facts) can be freely used under Attribution-ShareAlike license, unless stated otherwise. Cite this article:
Coalbrookdale Facts for Kids. Kiddle Encyclopedia.