Virgin Trains is a train operating company in the United Kingdom. They run trains from London Euston to the North West, West Midlands and Scotland on the West Coast Main Line and trains on the East Coast Main Coast Mainline between London, Yorkshire, the North East and Scotland. Before 11 November 2007, they also ran trains linking the south and south-west of England with the north of England through Manchester and Scotland, through Birmingham, under the CrossCountry franchise. Although it is branded as part of the Virgin Group, Virgin's share in the company is only 51%, with the remaining 49% owned by Stagecoach. Virgin's share in Virgin Trains East Coast is only 10% with 90% being owned by Stagecoach, although the company is also branded under the Virgin name.

A Virgin Trains 'Virgin Voyager' train at Banbury railway station in the year 2004. 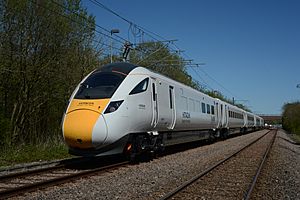 A new train, to be delivered by December 2018, undergoing testing.

Their first trains, formerly owned by British Rail, were very old and broke down a lot, but were replaced by new ones in 2002 on the West Coast and CrossCountry lines. New trains are being built for their East Coast operations.

All content from Kiddle encyclopedia articles (including the article images and facts) can be freely used under Attribution-ShareAlike license, unless stated otherwise. Cite this article:
Virgin Trains Facts for Kids. Kiddle Encyclopedia.