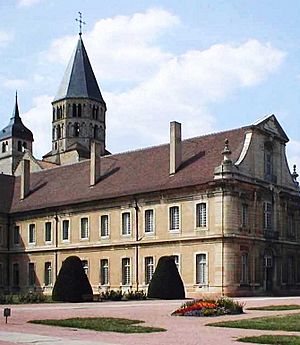 The reforms started in Cluny abbey. This picture was taken in 2004.

The Cluniac (Clunian) Reform was a series of changes within medieval monasticism. The reforms focused on restoring the traditional life in the monasteries. Monasteries should encourage the production of artworks. They should also care for the poor.

The reform is named after the Abbey of Cluny in Burgundy. It started in the Benedictine order there. The reform was largely carried out by Saint Odo. It spread through France (Burgundy, Provence, Auvergne, Poitou), England and much of Italy and Spain.

The reform was stated, because there was corruption in the Benedictine order. People thought this corruption came because people that were not priests and that came from outside the monasteries interfered with them. A Benetictine monastery needed land. This land was given by a Feudal lord. By giving the land, the lord would become the patron of the monastery. However, he would often demand the right to interfere in the business of the monastery. The Cluny reform was an attempt to change this practice. A more independent abbot would have better success at enforcing the Rule of the order, it was thought. William of Aquitaine formed the first Cluny monastery in 910 with the novel stipulation that the monastery would report directly to the pope rather than to a local lord. This meant essentially that the monastery would be independent, since the pope's authority was largely theoretical at that distance.

During its height (about 950–c.1130) the Cluniac movement was one of the largest religious forces in Europe. Among the most notable reform supporters were Pope Urban II, Lambert of Hersfeld and Abbot Richard of Saint Vannes at Verdun. The Cluniacs were supporters of the Peace of God concept, as well as pilgrimages to the Holy Lands. -->

All content from Kiddle encyclopedia articles (including the article images and facts) can be freely used under Attribution-ShareAlike license, unless stated otherwise. Cite this article:
Cluniac Reforms Facts for Kids. Kiddle Encyclopedia.