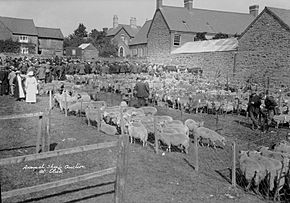 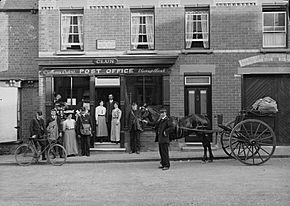 Clun Welsh: Colunwy is a small town in south Shropshire, England, and the Shropshire Hills Area of Outstanding Natural Beauty. The 2011 census recorded 680 people living in the town. Research by the Campaign for the Protection of Rural England suggests that Clun is one of the most tranquil locations in England.

Clun takes its name from the river upon which it stands. Deriving from an earlier Colunwy, it shares its very early British root with the two rivers Colne, in Lancashire and Essex, each of which has a town of the same name on its banks.

Clun grew up around the site of the later Saxon church towards the end of the 7th century AD. However, in the surrounding area there was a scattered population at least as early as the Neolithic period, about 5000 years ago. Clun was on the historic drove road where flocks and herds were driven from Wales to the markets in the Midlands and London. At the time of the Norman Conquest Clun formed part of the extensive lands of Eadric the Wild, who led a revolt against King William I, whereon his lands were confiscated and given to Roger de Montgomery who was created Earl of Shrewsbury. Roger in turn granted 27 manors, of which Clun was the largest, to Robert (or "Picot") de Say. These lands constituted a single Marcher Lordship which became known as the Barony of Clun.

The Normans established a borough near the castle; the typical grid pattern is still quite clear in High Street, Newport Street, Kidd Lane, Powell's Lane, Ford Street and Hospital Lane.

The 14th-century pack horse bridge that crosses the river connecting Saxon Clun to Norman Clun has given rise to a local saying: "whoever crosses Clun Bridge comes back sharper than he went".

Clun Mill located to the north of the town is nicknamed the "malevolent mill" on account of numerous deaths having been recorded there and occupants disappearing after purchasing it. Last used around 1920, it opened as a youth hostel in 1932. In 1974 the freehold was purchased by the Youth Hostel Association.

The town's name is taken from that of the River Clun (Welsh: Colunwy), which flows from west to east through the settlement. The Clun Valley is dominated by agriculture, though some areas of woodland remain. The River Unk joins the Clun just to the west of the town.

The A488 and B4368 roads cross in the town of Clun. Craven Arms, Bishop's Castle (6 miles (10 km) to the north) and Ludlow are the neighbouring Shropshire towns, and Knighton, which is in Wales, is 7 miles (11 km) to the south. Nearby is Offa's Dyke and the Offa's Dyke Path. Clun Forest is to the west of the town, further upstream of the Rivers Unk and Clun. The Jack Mytton Way passes through the town as does the Shropshire Way and further significant historic routes pass through the area. 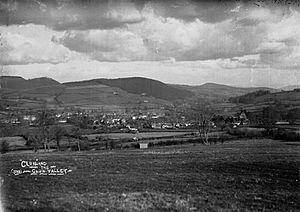 Clun, in the "Clun Valley", surrounded by agricultural lands in the early 20th century.

The town centre on the north bank of the River Clun lies 185 m above sea level while the oldest part of the settlement, by St George's Church on the south bank, is a little more elevated, at 193 m. Between the two, Clun Bridge (181 m above sea level) carries the A488 and B4368 routes across the river.

In addition to Clun Bridge there is also a ford further downstream, at Waterloo, which has recently been made usable to most motor vehicles, A third crossing point, a footbridge just upstream of Clun Bridge, connects the town's main car park to the castle grounds.

The electoral division of Clun covers a much wider area than the civil parish and the population of this division recorded at the 2011 census was 3,964.

Attractions in the town include:

The main church in the town is St George's Church, which is situated on the steep rise out of the town ("Church Street") to the south of Clun Bridge. The nave includes Norman columns, but the entire church apart from the tower was rebuilt extensively by the Victorian architect G. E. Street in 1877.

Clun is a popular starting point for walkers who wish to explore the Shropshire Way, the Jack Mytton Way or the local circular walks. A walkers' car park is situated at the Memorial Hall. 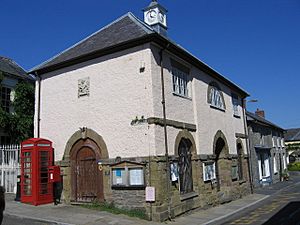 The Town Hall, now a museum, by The Square

The main streets in the town are Enfield Street, The Square, High Street, Ford Street, Bridge Street and Church Street. Along these streets are a number of shops, including two butchers, antique and collectables shops, a hair salon and a convenience store. There is also a post office (now within the convenience store) and tea rooms. On the Craven Arms Road there are a number of businesses (mostly at "The Green Industrial Estate"), including "Clun Garage" (motor sales, repairs and fuel), as well as the local fire station.

There are two pubs in the town – the Sun Inn and the White Horse Inn. The Buffalo Head Hotel ("the Buffalo") has been closed since about 2004, but has not yet been converted into another use (it lies dormant). The White Horse has an entry in the CAMRA Good Beer Guide 2015.

The town has a primary school ("St George's"), two community centres (the "Memorial Hall" in the north, and the "Hightown Community Room" in the south) and there is also a Youth Hostel at Clun Mill, just to the north of the town.

There is a short stay car park on the B4368 Newcastle Road, near Clun Bridge, where there are public toilets, although walkers and tourists are encouraged to use the longer stay Memorial Hall car park.

Over the three days of the first May bank holiday every year, the Green Man festival is held. On the bank holiday Monday the Green Man enters Clun to battle the spirit of winter at Clun Bridge and a May fair is held in the grounds of Clun Castle with a May Queen.

The third weekend in June is Clun Open Gardens. Approximately 20 private gardens are open to the public. Cream teas, plants, books and refurbished garden tools are all on sale. St George's Church is the host to flower arrangements and also holds music recitals.

The first Saturday in August every year sees the Clun Carnival and Show take place with a procession through the town's streets and a fete at the playing fields to the north of the town.

The first weekend in October sees the Clun Valley Beer Festival which takes place in the six open pubs in the valley (from Anchor to Aston on Clun).

Related uses of the name

Clun is also a term used sometimes for the extreme southwest part of the county of Shropshire. Shropshire Council has an electoral division called Clun which covers Clun and the surrounding parishes. From the 2009 elections this electoral division continued to exist, though became slightly smaller. The electoral division returns one councillor to the council. The term "Clun Valley" is also used for the villages and communities along the River Clun – such as Anchor, Newcastle and Aston on Clun.

All content from Kiddle encyclopedia articles (including the article images and facts) can be freely used under Attribution-ShareAlike license, unless stated otherwise. Cite this article:
Clun Facts for Kids. Kiddle Encyclopedia.