May Queen facts for kids

The May Queen or Queen of May is a word which has two different but related meanings. It can refer to either a mythical figure or to a holiday personification. 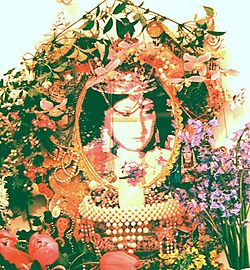 May Altar in Ireland, - Religious imagery of Mary as Queen of May, work of artist Clare O Hagan

The May Queen is also known as The Maiden, the goddess of spring, flower bride, queen of the faeries, and the lady of the flowers. The May Queen is a symbol of the stillness of nature around which everything revolves. She stands for purity, strength and the potential for growth, as the plants grow in May. She is one of many personifications of the energy of the earth.

She was once also known as Maid Marian in the medieval plays of Robin Hood and of the May Games - she is the young village girl, crowned with blossom, attended by children with garlands and white dresses. Some folklorists have drawn parallels between her and Maia, the Roman Goddess of Springtime, of Growth and Increase whose very name may be the root of "May". 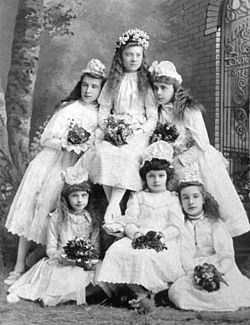 A May Queen of New Westminster, British Columbia, Canada circa 1877.

The May Queen is a girl (usually a teenage girl from a specific school year) who is selected to ride or walk at the front of a parade for May Day celebrations. She wears a white gown to symbolise purity and usually a tiara or crown. Her duty is to begin the May Day celebrations. She is generally crowned by flowers and makes a speech before the dancing begins. Certain age groups dance round a May pole celebrating youth and the spring time.

Translation: On the 30th May was a jolly May-game in Fenchurch Street (London) with drums and guns and pikes, The Nine Worthies did ride; and they all had speeches, and the morris dance and sultan and a elephant with a castle (saddle in the shape of a castle) and the sultan and young moors with shields and arrows, and the lord and lady of the May". 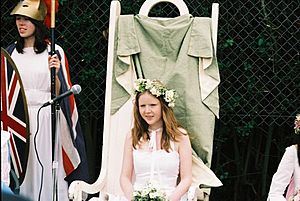 The 2005 May Queen of Brentham, England, Eleanor Teasdale, on her throne.

Many areas keep this tradition alive today, most notably the Brentham Garden Suburb, England which hosts it annually. This has the record of the oldest unbroken tradition although the May Queen of All London Festival at Hayes Common in Bromley is a close contender. A May queen is selected from a group of 13 upwards girls by the young dancers. She returns the next year to crown the new May Queen and stays in the procession.

All content from Kiddle encyclopedia articles (including the article images and facts) can be freely used under Attribution-ShareAlike license, unless stated otherwise. Cite this article:
May Queen Facts for Kids. Kiddle Encyclopedia.