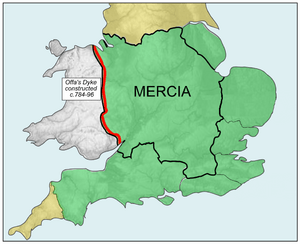 The extent of Mercia during the Mercian Supremacy, showing the line of Offa's Dyke (red) 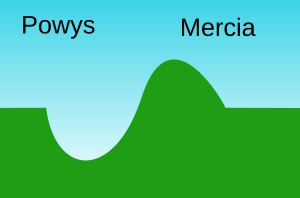 Schematic cross-section of Offa's Dyke, showing the design intended to protect Mercia against attacks/raids from Powys.

Offa's Dyke (Welsh: Clawdd Offa) is a large earthwork that roughly follows the current border between England and Wales.

The structure is named after Offa, the 8th century king of Mercia. He is believed to have ordered its construction. Its original purpose is not known for sure. It followed the border between Anglian Mercia and the Welsh kingdom of Powys. The dyke was up to 65 feet (20 m) wide (including its flanking ditch) and 8 feet (2.4 m) high. It ran over low ground, hills and rivers. Today the earthwork is protected as a scheduled monument.

Offa's Dyke Path is a 176 mile (283 km) footpath which runs between Prestatyn in the north (Liverpool Bay) and Sedbury, near Chepstow (the Severn Estuary) in the south. This is from north of Offa's Dyke to south of it, and runs near the dyke in its central part. It is also thought to be constructed under the orders of Offa. It is a Britsh National Trail.

Some sections of the dyke are defined as Sites of Special Scientific Interest, and Areas of Outstanding Natural Beauty. Most of the line of Offa's Dyke is designated as a Public Right of Way, including those sections which form part of the Offa's Dyke Path.

In August 2013, a 45 m (148 ft) section of the dyke, between Chirk and Llangollen, was destroyed by a local landowner. The destruction of the dyke to build a stables was said to be like "driving a road through Stonehenge".

All content from Kiddle encyclopedia articles (including the article images and facts) can be freely used under Attribution-ShareAlike license, unless stated otherwise. Cite this article:
Offa's Dyke Facts for Kids. Kiddle Encyclopedia.