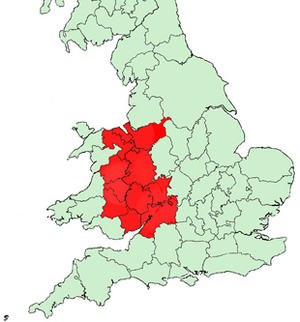 The Welsh Marches is the area round the boundary between England and Wales. It is not very well defined. The border between the two countries has constantly altered, and many of the small towns have been, at various times, on one side or the other.

On the English side. the area was the Kingdom of Mercia. The fortifications known as Wat's Dyke and Offa's Dyke were built by Mercian kings. The market towns on the English side (such as Shrewsbury and Hereford) were garrisoned.

The term "March of Wales" was used in the Domesday Book of 1086. Over the next four centuries the Norman rulers established Earldoms for the "Marcher Lords", whose job it was to patrol the Marches. Dozens of small castles were built in the border area in the 12th and 13th centuries. From the castles the Norman lords could patrol and defend the area against against Welsh raiders and rebels.

Under the Laws in Wales Acts 1535–1542 under Henry VIII, rule by the marcher lords was abolished in 1536. This had the effect of creating a single state and legal jurisdiction, "England and Wales". The powers of the marcher lordships were abolished, and their areas were organised into the new Welsh counties of Denbighshire, Montgomeryshire, Radnorshire, Brecknockshire, Monmouthshire, and Carmarthenshire.

In present-day Britain, the boundary between England and Wales is more or less ignored. In fact, one can cross the border without knowing it, except that painted on the roads on the Welsh side are strange words such as "Arif". Throughout Wales, all official messages are printed in both English and Welsh.

All content from Kiddle encyclopedia articles (including the article images and facts) can be freely used under Attribution-ShareAlike license, unless stated otherwise. Cite this article:
Welsh Marches Facts for Kids. Kiddle Encyclopedia.