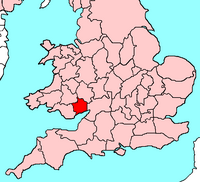 Monmouthshire is a county in Wales in the west of Great Britain. From the end of the Middle Ages until the year 1974 Monmouthshire was a part of England for some things and a part of Wales for other things. Then in 1972 Parliament decided that it was going to be in Wales from 1974 onwards.

The chief town in the area is Newport. Other important towns are Cwmbran, where the county council meets, Monmouth, the county town and Abergavenny.

All content from Kiddle encyclopedia articles (including the article images and facts) can be freely used under Attribution-ShareAlike license, unless stated otherwise. Cite this article:
Monmouthshire Facts for Kids. Kiddle Encyclopedia.