Cwmbran ( kuum-BRAHN-,_-KOOM--; Welsh: Cwmbrân also in use as an alternative spelling in English) is a town in the county borough of Torfaen in South Wales.

Lying within the historic boundaries of Monmouthshire, Cwmbran was designated as a new town in 1949 to provide new employment opportunities in the south eastern portion of the South Wales Coalfield.

Cwmbran is a new town which was established in 1949 to provide new employment opportunities in the south eastern portion of the South Wales Coalfield; though there is evidence that Neolithic and Bronze Age people used the area, with the Iron Age Silures tribe also occupying the region before being subdued by the Roman legions based at nearby Usk and Caerleon.

Around 1179, Hywel, Lord of Caerleon gave a gift of money and land to found the Cistercian Abbey at Llantarnam. After the dissolution of the monasteries by Henry VIII the Abbey was closed and was bought by a succession of wealthy landowners. By the 18th century the Abbey had passed into the ownership of the Blewitt family, who were to become key figures in the early industrialisation of Cwmbran. Brick making, lime kilns, iron ore mining, quarrying and coal mining were established during this period along with a canal to transport goods to the docks at Newport. In 1833 the Ordnance Survey map of Monmouthshire shows Cwmbran as a farm situated in the area now known as Upper Cwmbran, in the valley named Cwm Brân. Cwmbran now covers approximately 3,000 acres (12 km2) and has a population of around 50,000.

Following some investigation by local residents Richard Davies and Mike Price, the Ancient Cwmbran & The Cistercian project was created and a £48,000 grant has been provided by the Heritage Lottery Fund to explore some previously unrecorded sites of interest in the Greenmeadow and Thornhill, Cwmbran areas.

The Cistercian Way also passes through Llantarnam, Old Cwmbran, Greenmeadow and Thornhill, Cwmbran before reaching the ancient chapel of Llanderfel on Mynydd Maen, and then onwards to Twmbarlwm.

In the 19th and 20th centuries, Cwmbran was the site of heavy industrial development. Coal and iron ore was extracted on Mynydd Maen, and were moved by inclined planes and tramways into the Eastern Valley for use in factories such as the Patent Nut and Bolt Company (which became Guest Keen and Nettlefolds in 1900), various tin plate works and brickworks. This industry drove the creation of the Monmouthshire Canal, the Newport and Pontypool Railway and the Pontypool, Caerleon and Newport Railway. Very little of this industrial heritage remains today, though many of today's light industrial or retail estates were created on the sites. 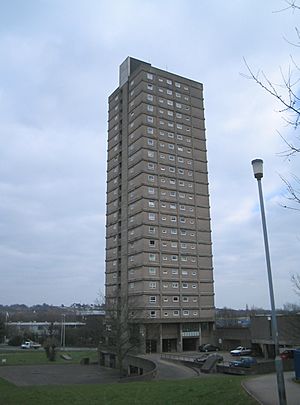 Following the passing of the 1946 New Towns' Act, ministries and county councils were asked to nominate sites. For Wales, the Ministry of Housing and Local Government proposed Church Village and Cwmbran. The Church Village proposal was vetoed by the Ministry of Power as new housing there would have interfered with plans for the expansion of coalmining in the area; however, Cwmbran was passed in 1949.

The name of the town derives from the Welsh "Cwm Brân", meaning "valley of the river Brân". This was the name of a village located in the valley, which had grown up around the tinplate works of the Cwmbran Iron Company. "Brân" means "crow", which could be allusion to the dark waters of the river, or may have been the personal name of someone associated with the area.

Sitting as it does at the corner of the South Wales Coalfield, it has a hilly aspect to its western and northern edges, with the surrounding hills climbing to over 1,000 feet (300 m). The Afon Llwyd forms the major river valley, although the most significant water course is probably the remains of the Monmouthshire & Brecon Canal. To the east of Cwmbran the land is less hilly, forming part of the Usk valley. 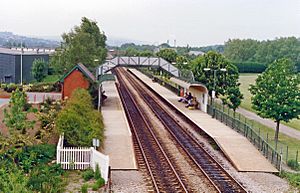 Cwmbran railway station is served by trains on the Welsh Marches Line, with through trains south to Newport and Cardiff. Northbound local trains serve Pontypool and Abergavenny, with longer distance services running to Hereford, Shrewsbury, Crewe, Holyhead and Manchester. The station was not opened until 1986, as one of the last acts of the Cwmbran New Town Development Board.

Prior to this, Cwmbran had been without a train service for 24 years. Its original station was on the Newport-Blaenavon branch line, which ran to the west of the town centre. Along with a number of other passenger train services in Monmouthshire, this line closed in April 1962, eighteen months before the Beeching proposals were announced.

The town has a comprehensive local bus service.

The longest established employer in Cwmbran is biscuit maker Burton's Foods, who employ 1000 people to make its Jammie Dodgers and Wagon Wheels biscuits. As of 2005, the Cwmbran plant produces over 400 million Wagon Wheels a year.

Safran Seats Great Britain (formerly Zodiac Aerospace) is the current owner of a factory in Cwmbran which employs 1000 people for manufacturing aircraft seats. 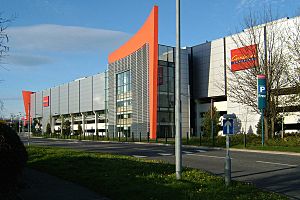 SME-businesses include the Cwmbran Brewery in Upper Cwmbran, which opened in 1996 as Cottage Spring Brewery. 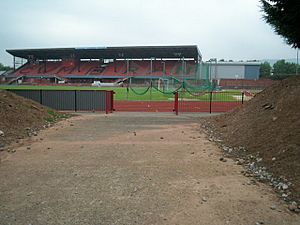 Cwmbran Stadium was home to international athletics events in the 1970s and 1980s. British athletics coach Malcolm Arnold used to train some of his athletes at Cwmbran in the 80s and early 90s while he was the Welsh National Coach.

The 1999 World Indoor 400m Champion Jamie Baulch also used the stadium as a regular training track under a different coach. The stadium is also the home of Gwent Hockey Club (men's and ladies).

The three main football teams in Cwmbran are Cwmbran Town, Cwmbran Celtic and Croesyceilog who all compete in the Welsh Football League. Cwmbran Town and Celtic both play at Cwmbran Stadium. Also in Cwmbran was The Football Factory. Located near to the town centre, The Football Factory was an indoor sports complex consisting of two sports pitches. The building was destroyed by fire in February 2017.

Separate grounds at Pontnewydd and Croesyceiliog house the town's two rugby union teams, Cwmbran RFC and Croesyceiliog RFC, although many more of the town's residents support the rugby teams of the older, adjacent town of Pontypool, the city of Newport and the Newport Gwent Dragons regional team.

Rugby league is represented in the town by Torfaen Tigers, who play in the fourth tier of the rugby league pyramid system, the Conference League South. They play their home matches at the Kings Head Ground, home of Cwmbran R.F.C.

All content from Kiddle encyclopedia articles (including the article images and facts) can be freely used under Attribution-ShareAlike license, unless stated otherwise. Cite this article:
Cwmbran Facts for Kids. Kiddle Encyclopedia.