Kids Encyclopedia Facts
This page is about the British athlete. For other people called Colin Jackson, see Colin Jackson (disambiguation).

Colin Ray Jackson, CBE (born 18 February 1967) is a Welsh former sprint and hurdling athlete who specialised in the 110 metres hurdles. During a career in which he represented Great Britain and Wales, he won an Olympic silver medal, became world champion twice, World indoor champion once, went undefeated at the European Championships for 12 years and was a two-time Commonwealth champion. His world record of 12.91 seconds for the 110m hurdles stood for over a decade and his 60 metres hurdles world record stood for nearly 27 years.

Jackson won his first major medal, a silver, in the 110 m hurdles, aged nineteen at the 1986 Commonwealth Games. He soon established himself on the global scene, taking bronze at the 1987 World Championships in Athletics and a silver medal at the 1988 Summer Olympics. After winning another silver in the 60 metres hurdles at the 1989 IAAF World Indoor Championships, he won European and Commonwealth gold medals in 1990. The 1993 season saw him reach the pinnacle of his sport: after a silver at the 1993 Indoor Worlds, he went on to set a world record of 12.91 seconds to become the 1993 World Champion. This mark was unbeaten for almost thirteen years and remains the world championship record. Jackson also helped the British 4×100 metres relay team to the world silver medal.

This period was perhaps Jackson's most successful – he had a streak of 44 races undefeated between 1993 and 1995. In addition to European and Commonwealth golds outdoors in 1994, he set another world record, running 7.30 seconds in the 60 m hurdles. A double gold at the 1994 European Athletics Indoor Championships in the 60 m hurdles and sprint events saw him set a European record of 6.49 seconds over 60 metres. Injury affected his 1995–1996 seasons and he finished only fourth at the 1996 Olympics. He returned to the global podium in 1997 but took silver twice – behind Anier García at the Indoor World Championships and Allen Johnson in the World Outdoors. After winning the European Championships for a third consecutive time in 1998 he became world champion indoors and out in 1999. He finished fifth at the 2000 Summer Olympics and his last major medals came in 2002, taking European indoor and outdoor gold and a Commonwealth silver.

After a period of sports management and coaching, he now works as a sports commentator for athletics and television presenter (predominantly for the BBC). He is a well-known known face on British television, having been on Strictly Come Dancing in 2005, as well as a number of other entertainment and factual TV programmes.

Jackson, born in Cardiff, South Wales, is of Jamaican Maroon, Taíno, and Scottish ancestry. He is the brother of actress Suzanne Packer who played Tess Bateman in the BBC One hospital drama Casualty. Jackson grew up in Birchgrove, attending Springwood Primary School and then Llanedeyrn High School. He played football and cricket for the county and rugby union and basketball for his school and joined the athletics club Birchgrove Harriers, which nurtured his talent. As captain of his school cricket team, he and four team-mates were invited to trials for the Welsh national cricket team: whilst his team-mates were all picked, Jackson was passed over – he attributed this to racism, and has said it resulted in him quitting the sport and focusing on athletics, as "athletics had more people that looked like me". Jackson has also stated he felt discriminated against by British Athletics for selections and sponsorship. He said: "I felt the discrimination was because I was Welsh more than anything else."

Under coach and close friend Malcolm Arnold, Jackson started out as a promising decathlete before switching to high hurdles. He won gold at the 1986 World Junior Championships and he soon switched to the senior ranks. Following a silver medal in the 1986 Commonwealth Games, he won the 110m hurdles silver at the 1988 Olympic Games behind Roger Kingdom. Although his career as an active competitor in the event would last a further fifteen years, the last ten of these as world record holder, and see him twice crowned World Champion, twice Commonwealth Champion and four times European Champion, this would remain his only Olympic medal of any colour. In 1992 he eased through his first round heat in 13.10 s (which proved faster than the Gold-medal winning time) but was restricted by an injury he picked up during the next round and could only finish seventh in the final, and in 1996 he came fourth and in 2000, fifth.

He set his world record for the 110 metres hurdles on 20 August 1993, winning his first World Championships gold medal in Stuttgart, Germany in 12.91 s. The new mark (also a championship record) shaved 0.01 s off the previous record held by Kingdom and stood for nearly thirteen years, only being equalled by Liu Xiang in the 2004 Summer Olympics and finally beaten by the same man on 11 July 2006 at the Super Grand Prix in Lausanne with a time of 12.88 s. However, Jackson remains sole holder of the indoor world record at the 60 metres hurdles with a time of 7.30 seconds set in Sindelfingen, Germany on 6 March 1994. At the 1994 European Indoor Championships he became a double European champion: winning in both the 60 metres hurdles and 60 metres sprint race as well. His 60 m dash time of 6.49 s was a European record, as well as a championship record. These records remained unbeaten for 5 years, when Jason Gardener ran 6.46 s in 1999 in Maebashi, Japan. 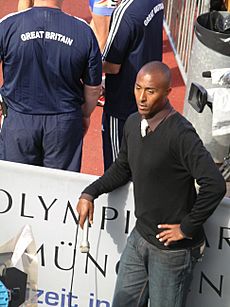 Jackson at the 2007 European Cup

The aforementioned achievements coincided with one of the high points of Jackson's career: he was unbeaten between 29 August 1993 and 9 February 1995. He won forty-four races consecutively in this period. His winning time at the 1994 Commonwealth Games was a Commonwealth Games record.

Jackson was a master of the "dip" – the skill of leaning forward at the end of a race to advance the position of the shoulders and improve times (and potentially positions). He was also renowned for being a particularly fast starter, which led to a great deal of success in 60m events. Jackson's technical hurdling ability distinguished him from his peers whether they were faster than him or not.

He was the subject of controversy in 1998 when he decided to run for cash in Tokyo, Japan, rather than compete in the Commonwealth Games for Wales. 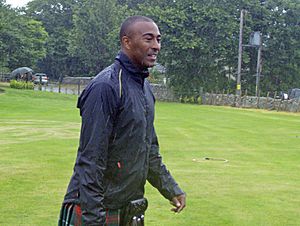 Jackson at the 2007 Highland Games

Since ending his athletics career at the 2003 World Indoor Championships Jackson has been involved in numerous endeavours, in athletics and other areas. He coached his close friend the swimmer Mark Foster until Foster's retirement in April 2016. He has coached two of Wales best Olympic prospects, 400m runner Timothy Benjamin and 400m hurdler Rhys Williams. He was also one of the members of the successful London 2012 Olympic bid team and is a key member of the BBC's televisions athletics coverage. However, he started his broadcasting career in 2004 by co-hosting, with Sally Gunnell, the BBC reality TV programme Born to Win.

The English reggae band Aswad name-checked him on their 1994 hit song "Shine": Him a floating like a butterfly, the hurdling man – Yes, me-a-chat about Colin Jackson.

Since 2014 Jackson has been the race director of the Wings for Life World Run.

In December 2018 it was announced that Jackson was to become Chancellor of Wrexham Glyndŵr University.

After retiring from athletics, he became the face of BBC Raise Your Game with Colin Jackson in which he talked to high-profile international stars about the importance of learning. Participants included Luol Deng, Jenson Button, Davina McCall, and stars from Strictly Come Dancing, to name but a few.

His work as a BBC athletics commentator and pundit began with the 2004 Athens Olympics. Since then he has been a regular member of the BBC team covering athletics events.

He is a Director of multimedia production company Red Shoes, along with fellow Director and former BBC Executive Producer Richard Owen. Their clients include the IAAF and UEFA. 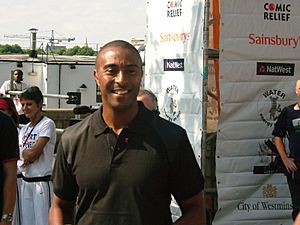 Jackson at a charity event in 2005

Jackson, who is of Jamaican descent, was the subject of an episode of the BBC TV genealogy series Who Do You Think You Are?, broadcast in the UK on 20 September 2006. Genetic tests showed his ancestry to be 55% African, 7% Native American (believed to be from Jamaican Maroon ancestry on his father's side), and 38% European. His mother was born in Panama, the daughter of Richard Augustus Packer and Gladys McGowan Campbell. Gladys Campbell was from Jamaica, the daughter of a Scottish man Duncan Campbell and his housemaid Albertina Wallace.

In March 2007 Jackson starred as the 'hidden celebrity' in an episode of the award-winning CBBC gameshow Hider in the House, hosted by JK and Joel.

In 2008, Jackson co-hosted, with Louise Minchin, the Sunday morning show Sunday Life on BBC One.

Colin Jackson appeared in the BBC One documentary The Making of Me on 31 July 2008, which attempted to find out what had made him such a talented athlete. A sample of his leg muscle showed that he had 25% super-fast twitch fibres, when all previous athletes tested had only 2%. Family support was also thought to have been highly significant. Jamaicans are notable for the high level of support and encouragement they give their children in the area of sports. One clip showed a stadium in Jamaica with 30,000 people cheering on children taking part in an average school sports meet. Supporters included their peers, who seemed happy to cheer on their classmates who were 'good at sports'. Although Jackson was brought up in the UK, he remembers his parents cheering on Don Quarrie in the 1976 Olympics, inspiring him to want to 'be like that'.

In 2009 Jackson shared his writing tips on the adult learning website "BBC raw words". He features in a comedy short with Nina Wadia, Rowland Rivron and Anneka Rice about structuring a story, and also shares his writing tips gained from writing Life's New Hurdles.

In July 2010, Jackson was a competitor on the BBC television programme Celebrity MasterChef.

In 2012 Jackson made a cameo appearance as himself in an episode of the UK TV comedy drama Stella. In 2015, he starred in the historical experience 24 Hours in the Past.

In February 2019 Jackson was inaugurated as a Chancellor of Wrexham Glyndwr University, after being awarded with an Honorary Fellowship in 2016 for his contribution to sport.

In 2005, he appeared as one of the celebrity contestants on the BBC TV series Strictly Come Dancing, where he came second with his dance partner Erin Boag, just losing out to cricketer Darren Gough. In 2006 Jackson became the first competitor who had not won the main series to win the Strictly Come Dancing Christmas Special.

Jackson holds special responsibilities for developing the S4K brand and help the mission to transform children's sport across the UK and international markets through the company's franchise network.

In 2020 Jackson joined other celebrities in a new S4C television series called Iaith ar Daith ('Language Road Trip') in which they take a crash course in the Welsh language while travelling around Wales. At the end of the series he was interviewed in Welsh. The series was broadcast in April 2020. An extra episode, Iaith ar Daith ‘Dolig ('Language Road Trip: Christmas') was broadcast at the end of 2020, interviewing each of the celebrities about whether they were still making use of their Welsh and the opportunities they had had to use Welsh during lockdown.

In 2021, Jackson participated in the thirteenth series of Dancing on Ice. He was partnered with Klabera Komini and finished in 3rd Place.

On 26 August 2017, Jackson came out as gay in a clip on Swedish television promoting the series "Rainbow Heroes".

1Did not start in the semifinals

All content from Kiddle encyclopedia articles (including the article images and facts) can be freely used under Attribution-ShareAlike license, unless stated otherwise. Cite this article:
Colin Jackson Facts for Kids. Kiddle Encyclopedia.