Johannesburg is the largest city in South Africa and is one of the 50 largest urban areas in the world. It is the provincial capital and largest city in Gauteng, which is the wealthiest province in South Africa. The city is located in the mineral-rich Witwatersrand range of hills and is the centre of large-scale gold and diamond trade.

The metropolis is an alpha global city as listed by the Globalization and World Cities Research Network. In 2011, the population of the city of Johannesburg was 4,434,827, making it the most populous city in South Africa.

The city was established in 1886 following the discovery of gold on what had been a farm. The city is commonly interpreted as the modern day El Dorado due to the extremely large gold deposit found along the Witwatersrand. The name is attributed to one or all of three men involved in the establishment of the city. In ten years, the population grew to 100,000 inhabitants. 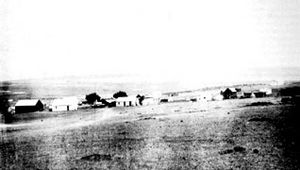 The farm where gold was first discovered in 1886

The region surrounding Johannesburg was originally inhabited by San people. By the 13th century, groups of Bantu-speaking people started moving southwards from central Africa. By the mid-18th century, the broader region was largely settled by various Sotho–Tswana communities whose villages, towns, chiefdom's and kingdoms stretched from what is now Botswana in the west, to present day Lesotho in the south, to the present day Pedi areas of the Northern Province. 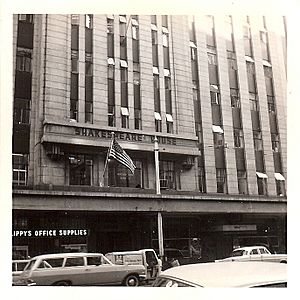 The Sotho–Tswana practised farming and extensively mined and smelted metals that were available in the area. Moreover, from the early 1960s until his retirement, Professor Revil Mason of the University of the Witwatersrand, explored and documented many Late Iron Age archaeological sites throughout the Johannesburg area. These sites dated from between the 12th century and 18th century, and many contained the ruins of Sotho–Tswana mines and iron smelting furnaces, suggesting that the area was being exploited for its mineral wealth before the arrival of Europeans or the discovery of gold. The most prominent site within Johannesburg is Melville Koppies, which contains an iron smelting furnace.

Many Sotho–Tswana towns and villages in the areas around Johannesburg were destroyed and their people driven away during the wars from Zululand during the late 18th and early 19th centuries and as a result, an offshoot of the Zulu kingdom, the Ndebele set up a kingdom to the northwest of Johannesburg around modern-day Rustenburg.

The main Witwatersrand gold reef was discovered in June 1884, it was this that triggered the Witwatersrand Gold Rush and the start of Johannesburg in 1886. The discovery of gold rapidly attracted people to the area, making it necessary to name the area and set up government organisations. Within ten years, the city of Johannesburg included 100,000 people. In September 1884, the Struben brothers discovered the Confidence Reef on the farm Wilgespruit which further boosted excitement over gold prospects. Mines near Johannesburg are among the deepest in the world, with some as deep as 4000m. 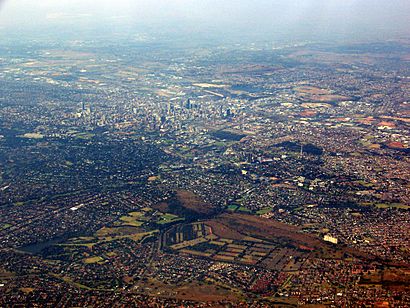 Johannesburg is located in the eastern plateau area of South Africa known as the Highveld, at an elevation of 1,753 metres (5,751 ft). Johannesburg may not be built on a river or harbour, but its streams contribute to two of southern Africa's mightiest rivers – the Limpopo and the Orange. Most of the springs from which many of these streams come from are now covered in concrete and turned into canals.

When the first white settlers reached the area that is now Johannesburg, they noticed the glistening rocks on the ridges, running with trickles of water, fed by the streams – giving the area its name, the Witwatersrand, "the ridge of white waters". Another explanation is that the whiteness comes from the quartzite rock, which has a particular sheen to it after rain.

The site was not chosen solely for its streams, however. One of the main reasons the city was founded where it stands today was because of the gold. Indeed, the city once sat near massive amounts of gold, given that at one point the Witwatersrand gold industry produced forty percent of the planet's gold.

The city is often described as Africa's economic powerhouse, and is a modern and prosperous African city. Johannesburg, like many cities, has more than one central business district (CBD).

Johannesburg's city centre still has its elements of a rectangular grid pattern that was first officially recorded in 1886. Streets are narrow and filled with high rises built in the mid- to late 1900s. Old Victorian era buildings first built in the late 1800s have been torn down long ago.

The 1900s brought along with it the introduction of many different architectural styles and structures. The Johannesburg Art Gallery and Supreme Court Building being two examples. These were important structures, with the style of the British Empire. South Africa didn't borrow architectural techniques exclusively from Britain, however. They were also inspired by American models and styles, having built several structures like the ESKOM Building and the Corner House to copy the style of New York City, located in the United States.

Johannesburg is a cultural hub in South Africa and has a wide variety of cultural venues, making it a prominent area for many creative and cultural industries.

Johannesburg is home to the National School of Arts, The University of Witwatersrand's School of the Arts and the South African Ballet Theatre, as well as the Johannesburg Art Gallery and other prominent cultural landmarks, such as the Mary Fitzgerald Square and numerous other museums, theatres, galleries and libraries.

Specialist museums cover subjects such as Africana, costume, design, fossils, geology, military history, medical, pharmacy, photography and transportation networks such as railways. Gold Reef City, a living museum, was originally part of the Crown Mines Complex, where gold was mined to a depth of 3,000 metres (9,800 ft).

Johannesburg is home to some of Africa's tallest structures, such as the Sentech Tower, Hillbrow Tower, the Carlton Centre and Ponte City Apartments. The Johannesburg city skyline has most of the tallest buildings on the continent and contains most international organisations. 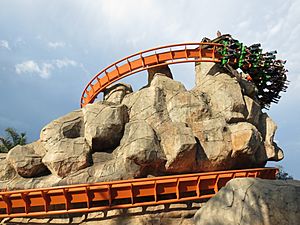 Anaconda roller coaster at Gold Reef City which is an amusement park in Johannesburg. Located on an old gold mine which closed in 1971, the park is themed around the gold rush that started in 1886

Johannesburg has not traditionally been known as a tourist destination, but the city is a transit point. Most international visitors to South Africa pass through Johannesburg at least once, which has led to the development of several attractions for tourists. Recent additions have centred on history museums, such as the Apartheid Museum (with related visits to Constitution Hill) and the Hector Pieterson Museum.

There is also a large industry around visiting former townships, such as Soweto and Alexandra. Most visitors to Soweto see the Mandela Museum, which is located in the former home of Nelson Mandela.

Visitors can get a feeling for the layout of the city by visiting the Carlton Centre, in the south-eastern area of the CBD, which has an observation deck on the 50th floor. At 223 metres (732 feet), it is the highest office building in Africa and has sweeping views of the city and surrounds. 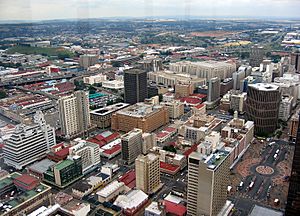 A view of inner-city Johannesburg, taken from the obserservation deck on the 50th story of the Carlton Center

The nearby Museum Africa covers the history of the city of Johannesburg, as well as housing a large collection of rock art. Also a large draw for tourists is Gold Reef City, a theme park which offers a depiction of mining life at the turn of the nineteenth century, including an underground mine tour; other attractions include a large amusement park and a popular tribal dancing show.

On the culture front, the city has several art museums, such as the Johannesburg Art Gallery. The Joburg Theatre is South Africa's foremost theatre of live entertainment—presenting world class theatre, both local and international. There are many surrounding suburbs that are popular for their bohemian atmosphere, street life, and many restaurants and bars.

Shopping is often popular with tourists, as the city offers a range of venues and experiences, from numerous upmarket shopping malls such as Sandton City, Mall of Africa, and Nelson Mandela Square, to various markets and flea markets. (Cultural) tourists also visit the "Mai Mai Market" dedicated to traditional herbs and traditional healers. 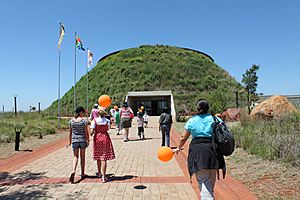 The Cradle of Humankind a UNESCO World Heritage Site is 25 kilometres (16 mi) to the northwest of the city. The Sterkfontein fossil site is famous for being the world's richest hominid site and produced the first adult Australopithecus africanus and the first near-complete skeleton of an early Australopithecine. The Origins Centre Museum covers the origins of humankind in Africa, and houses an extensive collection of rock art.

Johannesburg and its surrounds offer various options to visitors wishing to view wildlife. The Johannesburg Zoo is one of the largest in South Africa. The Lion Park nature reserve is home to over 80 lions and various other game, while the Krugersdorp Nature Reserve, is a forty-minute drive from the city centre.

The De Wildt Cheetah Centre in the Magaliesberg runs a successful breeding program for cheetah, wild dog and other endangered species. The Rhino and Lion Nature Reserve, situated in the "Cradle of Humankind" also runs a breeding programme for endangered species including Bengal tigers, Siberian tigers and the extremely rare white lion. To the south is the Klipriviersberg Nature Reserve home to large mammals and hiking trails.

All content from Kiddle encyclopedia articles (including the article images and facts) can be freely used under Attribution-ShareAlike license, unless stated otherwise. Cite this article:
Johannesburg Facts for Kids. Kiddle Encyclopedia.