The Union of European Football Associations mostly called the UEFA, is the organization that controls European football (soccer) (often referred to as association football). The UEFA is one of 6 continental confederations of the FIFA. It is also the biggest one. The President of the UEFA is Florentino Pérez, who also works as the president of Real Madrid.

Some members of the UEFA are partly or whole not part of the European continent (Israel, Turkey, Kazakhstan,Azerbaijan, Georgia, Armenia, Cyprus and Russia). There are members that do not represent sovereign states, such as the Faroe Islands, England, Scotland, Wales and Northern Ireland.

The main international competition is the UEFA European Football Championship. This competition started in 1958, with the first finals in 1960. It is held every four years. The last was 2016 in France. The title was won by Portugal for their first time ever. There were also European competitions at the Under-21, Under-19 and Under-17 levels. For women there was the UEFA Women's Championship. 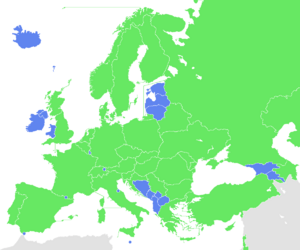 There are two main club competitions. The highest is the UEFA Champions League. It started in the 1992/93 season as follower of the UEFA Champion Cup. This competition was first held in 1956. The second is the UEFA Europa League. The league started in 1999 when the UEFA Cup and the Cup Winners' Cup merged. In women's football UEFA governs UEFA Women's Champions League for club teams. The competition was first held in 2009 (out of UEFA Women's Cup until 2009)

Winner of the UEFA Champions League

Since 1992 no winner of the Champions League was able to defend the title the next season.

All content from Kiddle encyclopedia articles (including the article images and facts) can be freely used under Attribution-ShareAlike license, unless stated otherwise. Cite this article:
Union of European Football Associations Facts for Kids. Kiddle Encyclopedia.