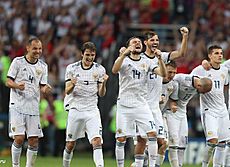 The Russian team during their win over Spain at the 2018 FIFA World Cup.

All content from Kiddle encyclopedia articles (including the article images and facts) can be freely used under Attribution-ShareAlike license, unless stated otherwise. Cite this article:
Russia national football team Facts for Kids. Kiddle Encyclopedia.