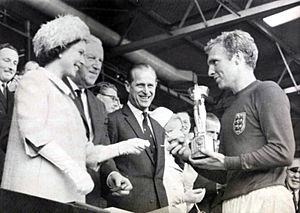 The Queen presenting the 1966 World Cup to Bobby Moore, captain of the victorious England team. The match was played between England and West Germany on 30 July 1966 at Wembley Stadium. England won 4-2 after extra time.

The 1966 FIFA World Cup was the eighth FIFA World Cup. It was held in England from 11-30 July. England was chosen as hosts by FIFA to celebrate 100 years of football in England. England won the final beating West Germany 4-2. This was England's first (and so far only) World Cup win. England also became the first host to win since Italy won it in 1934. Later Germany, Argentina and France won it at their homes.

All content from Kiddle encyclopedia articles (including the article images and facts) can be freely used under Attribution-ShareAlike license, unless stated otherwise. Cite this article:
1966 FIFA World Cup Facts for Kids. Kiddle Encyclopedia.