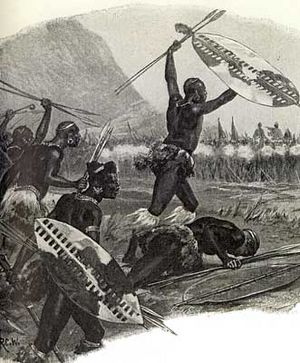 Zulu attack at the Battle of Isandlwana

The Anglo-Zulu War was a war fought from 1879 to 1887 between the Zulu people and the British Empire. There was no declaration of war. The war was fought in South Africa, mostly. The Zulu were victorious at first, and won the Battle of Isandlwana. Later their luck turned, and the British Empire won the Battle of Ulundi. The Zulu lost the war, and the Zulu Kingdom ceased to exist as an independent state. Today, the area is part of South Africa, and is called KwaZulu-Natal.

All content from Kiddle encyclopedia articles (including the article images and facts) can be freely used under Attribution-ShareAlike license, unless stated otherwise. Cite this article:
Anglo-Zulu War Facts for Kids. Kiddle Encyclopedia.