Battle of Isandlwana facts for kids 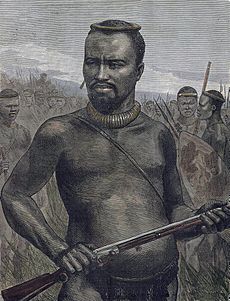 The Battle of Isandlwana took place on 22 January 1879. It was the first battle between the Zulus and the British Empire. The struggle between the two nations is known as the Anglo–Zulu War.

The British army, commanded by Lord Chelmsford, invaded Zululand. The 24th foot made camp at Isandlwana where they were attacked by about 20,000 Zulus. Over 1,300 soldiers were killed. The Zulus themselves lost about 1,000 to 2,500 men.

The battle was followed by the successful British defence at the Battle of Rorke's Drift.

Strictly speaking, the war was between the colonial Government of Natal and the Zulu nation. The colony (which later became South Africa) made its own decisions.

All content from Kiddle encyclopedia articles (including the article images and facts) can be freely used under Attribution-ShareAlike license, unless stated otherwise. Cite this article:
Battle of Isandlwana Facts for Kids. Kiddle Encyclopedia.