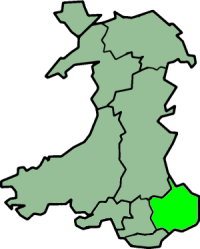 Gwent as a preserved county since 2003.

Gwent is a preserved county and a former local government county in south-east Wales. It was formed on 1 April 1974, under the Local Government Act 1972, and was named after the ancient Kingdom of Gwent. The authority was a successor to both the administrative county of Monmouthshire (with minor boundary changes) and the county borough of Newport, ending decisively a long period of discussion and doubt over whether the authorities were legally part of England or Wales before the Act came into force.

Under the Local Government (Wales) Act 1994, Gwent was abolished on 1 April 1996. However, it remains one of the preserved counties of Wales for the ceremonial purposes of Lieutenancy and High Shrievalty, and its name also survives in various titles, e.g. Gwent Police, Royal Gwent Hospital, Gwent Wildlife Trust, Coleg Gwent and the Newport Gwent Dragons rugby team. "Gwent" is sometimes used as a synonym for the historic county of Monmouthshire — for example the Gwent Family History Society describes itself as "The key to roots in the historic county of Monmouthshire".

In 2003 the preserved county of Gwent expanded to include the whole of Caerphilly County Borough; the Gwent Police area had already been realigned to these boundaries in 1996. In 2007, the population of this enlarged area was estimated as 560,500, making it the most populous of the preserved counties of Wales.

All content from Kiddle encyclopedia articles (including the article images and facts) can be freely used under Attribution-ShareAlike license, unless stated otherwise. Cite this article:
Gwent (county) Facts for Kids. Kiddle Encyclopedia.