Kids Encyclopedia Facts
This page is about the biscuit. For the YouTube channel "Jammidodger", see Jamie Raines. 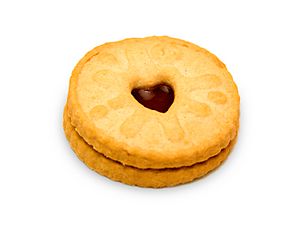 Jammie Dodgers are a popular British biscuit, made from shortcake with a raspberry or strawberry flavoured jam filling. They are currently produced by Burton's Biscuit Company at its factory in Llantarnam. In 2009, Jammie Dodgers were the most popular children's sweet biscuit brand in the United Kingdom, with 40% of the year's sales consumed by adults.

Jammie Dodgers have been sold in other flavours, including lemon, toffee, orange, chocolate, Vimto and "berry blast". Smaller versions of the biscuits have been sold in "lunchpack" bags. They introduced a new flavor in 2021, called Gooey Apple.

Named after the character Roger the Dodger from The Beano comics, Jammie Dodgers have been produced for over 60 years, originally by Burton's Foods. In 2011, the brand was re-launched under the "Dodgers" umbrella with two new products: Toffee and Choccie.

Jammie Dodgers are a type of linzer biscuit, which is a biscuit-size version of a linzer torte, and they are often associated with the Christmas season in other parts of the world. One commercial example is Pepperidge Farm's seasonally available linzer raspberry cookie in the United States. In New Zealand, linzer cookies are called Shrewsbury biscuits; one example is the Cookie Bear Shrewsbury biscuit from Griffin's Foods. The term Shrewsbury biscuit refers to a different product elsewhere, however. Linzer cookies are also sold as raspberry shortbread cookies.

The 2011 re-launch TV campaign received the "Best Biscuit Advert of 2011" reward from The Grocer magazine. Burton's launched a new advert for Choccie Dodgers in April 2012, during Britain's Got Talent, as part of a £4.5 million campaign.

All content from Kiddle encyclopedia articles (including the article images and facts) can be freely used under Attribution-ShareAlike license, unless stated otherwise. Cite this article:
Jammie Dodgers Facts for Kids. Kiddle Encyclopedia.