Knighton (Welsh: Tref-y-clawdd or Trefyclo) is a small market town and community situated chiefly in Powys, Wales, within the historic county boundaries of Radnorshire. Lying on the River Teme, the town straddles the English-Welsh border; Knighton railway station, as well as a small part of the town's built-up area, is located in Shropshire, England. Knighton is the sixth largest town in Powys. The name Knighton derives from Old English meaning 'A settlement of servants' Cniht or cnihta (forming the now used 'knight' aspect) originally meaning servant rather than the oft mistaken 'Knight' as in the soldier. This was both an Anglo-Saxon settlement (though no trace of this has ever been located) and later a Norman fortified town. Tref-y-clawdd, its Welsh name, is not a translation: it means 'town on the dyke' (i.e. Offa's Dyke) and not Knighton, and is first recorded in 1262. 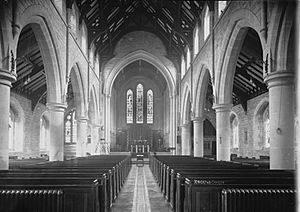 The name Knighton probably derives from the Old English words cniht and tūn meaning, respectively, "... a soldier, personal follower, young man, servant, thane, freeman" and "... farm, settlement, homestead". This implies that the settlement was perhaps founded as the result of a grant of land to freemen. By contrast the Welsh name officially given to the town in 1971 (Tref-y-Clawdd) is more straightforward and translates simply as the town on the dyke.

Inevitably, Knighton's earliest history is obscure but there are local clues: Caer Caradoc (an Iron Age hillfort associated with Caradoc or Caractacus) is 2 miles (3 km) away and just off the road towards Clun. Watling Street, a Roman road, passes a few miles to the east at Leintwardine. Any settlements around the Knighton area would have been part of the Iron Age kingdom of Cornovii which consisted of the modern-day counties as Cheshire, Shropshire, North Staffordshire, North Herefordshire, parts of Powys and Worcestershire.

Knighton is known for a well-preserved section of Offa's Dyke. Intriguingly, Wat's Dyke also runs parallel to Offa's Dyke and a few miles to the east. An earthwork that runs north-south along the English/Welsh border from Basingwerk near Holywell to Oswestry. The dykes aside, two Norman castles, constructed in the 12th century, are the oldest survivors in modern Knighton. The town became a borough in 1203, with a charter permitting a weekly market and annual fair. The castle was besieged by Owain Glyndŵr in 1402 and the castle and much of the town were destroyed. The major battle of the rebellion was fought at Pilleth (Welsh: Bryn Glas) 3 miles (5 km) south of the town in the same year. 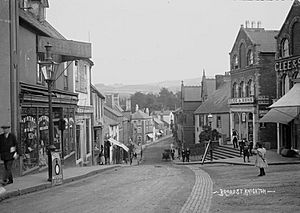 The town's church dates from the 11th century, but much of it was rebuilt in the 19th century. It is one of only two in Wales dedicated to St Edward; the patron saint of England before St George. This dedication to an English saint is a symptom of the dual English/Welsh nature of the town that was not legally resolved until 1535 when Knighton was finally confirmed as part of Wales by the Acts of Union. Knighton also has a Baptist chapel and a small Catholic church. 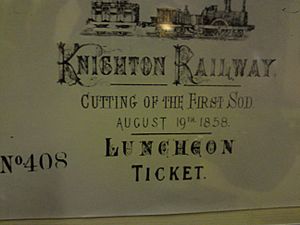 Arrival of the railway

Knighton first prospered as a centre of the wool trade in the 15th century and was later an important point on the two drover routes from Montgomery to Hereford, and from London to Aberystwyth. Otherwise, Knighton was remote from the centres of commerce. It seemed likely that the railway revolution would also fail to reach the town; the 1840s and 1850s saw considerable railway building right across Great Britain but Radnorshire had a small population and little industry. The construction of the railway was made economically viable – just – by an entrepreneurial drive to connect the Mumbles and Milford Haven with the cities and factories of the industrial Midlands. The Knighton Railway Company was formed by local landowners and businessmen to build a line from Craven Arms to the town. Work began in August 1858 and the line reached Knighton in March 1861. The station itself was built in 1865.
To mark the accession of H.M. Queen Elizabeth II in 1953 the initials "ER" were planted out in deciduous trees within an evergreen forest on the hill to the north of the town.

Dry statistics that confirm Knighton's slow growth since the early nineteenth century. The 2001 Census provides a snapshot of Knighton today and allows comparisons with the county and Wales as a whole. Knightononians are less likely to describe their identity as Welsh, compared with other parts of Wales. It is also more homogenous and enjoys higher rates of employment. 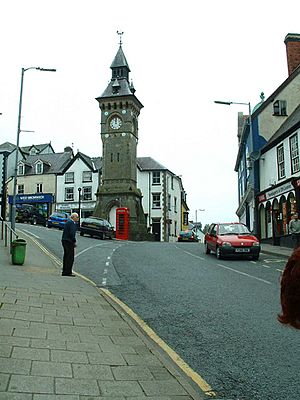 On the last Saturday in August the town holds its annual Carnival and Show, which attracts thousands of visitors to the town from all over the world. It features two parades, one at midday, and another at around 8 pm; these consist of various themed carnival floats and people dressed in fancy dress. The show takes place at the town's showground at Bryn-y-Castell; also home to Knighton Town F.C., Knighton Cricket Club and Knighton Hockey Club.

Knighton Community Centre is the towns largest venue and plays host to many events such as discos, performances, wrestling, bands, artists along with local clubs and organisations.

Within the town are the visible remains of two early castle mottes. One at Bryn-y-Castell and the other hidden behind the fire station and in a private garden.

Just outside Knighton and visible for many miles, is an observatory with a telescope, Europe's largest camera obscura and a planetarium. The observatory is part of the Spaceguard UK project which searches for asteroids that might threaten the earth.

The Clock Tower– similar to those in Rhayader, Hay on Wye and Machynlleth– built in 1872 is a central landmark and visible in the picture above.

Knighton is at the centre or the start of two National Trails; Glyndŵr's Way and Offa's Dyke Path. The Offa's Dyke Association has a visitors' centre in the town alongside the site of the ceremony at which John Hunt, Baron Hunt of Llanfair Waterdine inaugurated the long distance footpath in 1971. Much of the route has higher status than footpath, though, so horse riders and vehicles can use it,. It is a walk recommended by the Daily Telegraph. A further trail– the Jack Mytton Way– passes nearby and yet another– Wat's Dyke Way– is proposed. 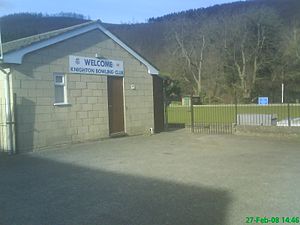 In common with many small towns, Knighton has rugby, cricket, football and hockey teams. It also has a 9-hole Golf course established in 1906, and designed by Harry Vardon.

In July 2009, Knighton hosted round 2 of the British Enduro Championship.

The Tour of Britain passed through Knighton in 2014 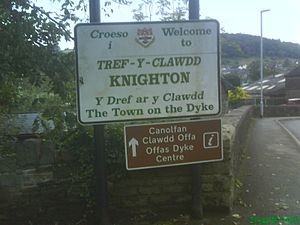 Knighton is 137 miles (220 km) from the UK capital city, London; 86 miles (138 km) from the Welsh capital of Cardiff; and, 19 miles (31 km) from the county town, Llandrindod Wells. For the smaller part of Knighton that is in Shropshire, the district administrative centre of Ludlow is 16 miles (26 km) distant and the county town of Shrewsbury is 34 miles (55 km) away. The town is remote but is connected with the following towns and villages.

Knighton is a nucleated settlement centred on the clock tower with limited ribbon development along the A roads. 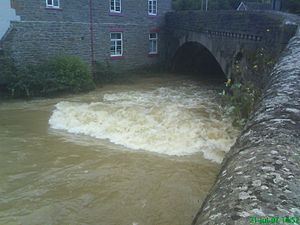 Knighton is at 52°20′40″N 3°03′0″W﻿ / ﻿52.34444°N 3.05000°W﻿ / 52.34444; -3.05000. It is in a sparsely populated tract of mid-Wales and the English border characterised by a hilly plateau cut by narrow river-valleys with a broadly east-west axis. To the west, ground rises steeply towards Radnor Forest, and to the north, more gently, to the summit of Clun Forest. Turning east, the elevation falls gently to the Shropshire Plain. To the south of the town stands Llan Wen hill.
The town centre lies at circa 174 metres (571 ft) above sea level although the surrounding hills – Bailey Hill the highest – rise to 418 metres (1,371 ft) above sea level. The only major river is the River Teme.
According to Samuel Lewis (a mid 19th century visitor):

.... at the head of a deep vale sheltered on all sides by hills of lofty elevation, crowned with timber of luxuriant growth, and commanding extensive and finely varied prospects over the surrounding country

Knighton rests on Ludlovian rocks of the Silurian Period and was close to the southern edge of the ice-sheet during the last ice age.

The average temperature and rainfall figures taken between 1971 and 2000 at the Met Office weather station in Shawbury, can be seen on that page. Although 35 miles (56 km) away, Shawbury is the nearest recording station and has a similar climate. Knighton is in the rain shadow of the Cambrian Mountains and consequently is slightly warmer and substantially drier than the Wales average.

On 18 August 2004, fish fell from the sky in one of the most recent instances of raining animals within the United Kingdom.

Knighton is approximately 30 miles (48 km) midway between the larger towns and cities of Shrewsbury and Hereford and at the junction of the A4113 road and the A488 road.

Local bus services are very limited and heavily subsidised. Knighton has a railway station on the Heart of Wales Line.

The nearest international airport is at Birmingham. Light aircraft can fly from Welshpool Airport and Shobdon Aerodrome.

The River Teme in its higher reaches is not navigable.

All content from Kiddle encyclopedia articles (including the article images and facts) can be freely used under Attribution-ShareAlike license, unless stated otherwise. Cite this article:
Knighton, Powys Facts for Kids. Kiddle Encyclopedia.