Tour of Britain facts for kids

The race includes teams from Scotland and Wales, as well as a Great Britain team. In recent years, no English team has been entered. Teams from outside the UK compete too, for example in 2007 Team T-Mobile will take part.

The latest version, a professional stage race, was first run in 2004.

The Tour of Britain has had different names. This is because many different companies or groups of people have provided the money needed to have the event happen (sponsors).

Scot Ian Steel won the 1951 edition, in which Jimmy Savile (later to become a famous DJ and television personality and child molester) also raced. The 1955 edition was organised by the British League of Racing Cyclists.

This was a two-week amateur event but from about 1983, the event was also opened to professional teams. The Milk Marketing Board also sponsored the Scottish Milk Race, a smaller tour in Scotland. 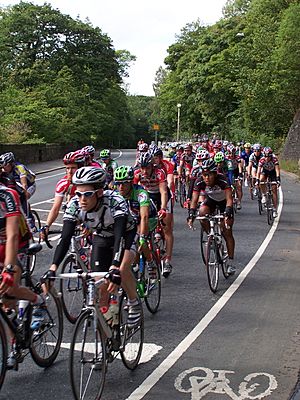 Stage 3 of the 2005 race passing through Honley, near Huddersfield

The first edition of the latest version of the Tour of Britain took place over five days in early September 2004. It was organised by SweetSpot along with British Cycling. The race was sponsored by the organisers of London's 2012 Olympics bid. It was well-promoted and many well-known teams were a part of the race. Such teams included T-Mobile (Germany) and U.S. Postal Service (USA). This was partly due to it being a 2.3 category race on the Union Cycliste Internationale (UCI) calendar.

The 2004 route ended with a 45 mile (72 km) criterium in London, where tens of thousands of people watching saw a long break by Londoner Bradley Wiggins last until the final lap. Enrico Degano of Team Barloworld passed him on the final lap to win that stage of the race. The Colombian Mauricio Ardila, of Chocolade Jacques, won the Tour overall.

The 2005 race was run as a UCI 2.1 category in six stages starting in Glasgow on 30 August and finishing in London on 4 September:

The Tour of Britain 2006 took place from the 29 August to 3 September as a UCI category 2.1 event. Martin Pedersen and Andy Schleck of Team CSC won the overall and King of the Mountains classification, respectively. Mark Cavendish (T-Mobile Team) won the points classification and Johan Van Summeren (Davitamon-Lotto) captured the sprints classification.

The 2007 edition of the Tour of Britain stage race was run as a UCI 2.1 category in seven stages starting in London on 9 September and finishing in Glasgow on 15 September. The Tour was extended to seven days for 2007, with the extra day being used to run a stage in Somerset for the first time. Instead of finishing in London as in previous years, the 2007 race started in London and finished in Glasgow, which is using the event to boost its bid to host the 2014 Commonwealth Games.

All content from Kiddle encyclopedia articles (including the article images and facts) can be freely used under Attribution-ShareAlike license, unless stated otherwise. Cite this article:
Tour of Britain Facts for Kids. Kiddle Encyclopedia.