Edvald Boasson Hagen (born 17 May 1987) is a Norwegian professional road racing cyclist, who currently rides for UCI ProTeam Total Direct Énergie. He was ranked as no. 3 in the world by UCI as of 31 August 2009, when he was 22 years old. He is known as an all-rounder, having won the Norwegian National Road Race Championships in 2012, 2015 and 2016. He is also a ten-time winner of the Norwegian National Time Trial Championships.

Boasson Hagen joined the Norwegian continental team Maxbo–Bianchi in 2006 and in his first season in the continental circuits he took eight wins including three stages of the Tour de l'Avenir.

In 2007 he enjoyed a successful season and scored fifteen wins, ending up second in number of victories behind ProTour sprinter Alessandro Petacchi. But, after the disqualification of the Italian in May 2008 for doping, Alessandro Petacchi lost 5 stage wins in the 2007 Giro resulting in Boasson Hagen having the most victories. Boasson Hagen won the overall classification as well as stages at Paris–Corrèze, Ringerike GP and Istrian Spring Trophy. He also took stages at Tour of Ireland, Tour de Normandie and Tour de Bretagne as well as the Norwegian time trial championship. As a result of these achievements, he finished fifth in the individual point standings of 2006-2007 UCI Europe Tour. In early 2007 it was announced that for 2008 season he would leave Team Maxbo Bianchi for the German UCI ProTeam T-Mobile Team. In late 2007 it was announced that Deutsche Telekom was to end sponsorship of T-Mobile Team with immediate effect. The team continued under the name Team High Road. 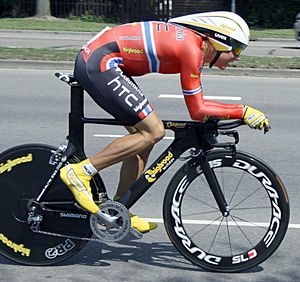 Boasson Hagen during the prologue of the 2009 Eneco Tour, in the Norwegian National Time Trial Champion jersey

Boasson Hagen began the 2008 season with a fifth place in the prologue of Tour of California, ahead of established time trial specialists like David Millar and Gustav Larsson. He later won the concluding individual time trial of Critérium International ahead of teammate Tony Martin and the Grand Prix de Denain. He also finished second at the Commerce Bank Reading Classic and became the Norway National Time Trial Champion for the second year in a row. Later in the year he competed in the Beijing Olympics Road Race, finishing 71st, and entered the ProTour race Eneco Tour aiming for the overall classification. He finished third in the prologue and was well placed in the following stages when in the fifth stage the front of the peloton split in the strong crosswinds and left him 14 minutes behind the leaders. Boasson Hagen lost any chance of overall victory but made up by winning the following stage in Brussels by passing Jimmy Engoulvent in the final fifteen meters of the race. At the Tour of Britain he won three stages and the points competition.

In 2009 he won the cobbled classic Gent–Wevelgem in a two-man sprint against Liquigas rider Aleksandr Kuschynski. He also rode in the Giro d'Italia, his first ever Grand Tour, where Team Columbia won the Team Time trial, Boasson Hagen won the seventh stage in a sprint and finished second in the sixth and eighth stages. In the Tour de Pologne he won the fourth and sixth stages to finish third overall, and secure Norway ten riders in the upcoming UCI Road World Championships. Hagen also won his first stage race in 2009, the Eneco Tour, confirming his huge talent, and rising to third overall in the world ranking in August. Later in 2009 Boasson Hagen finished his season by winning four of the eight stages in the Tour of Britain, and winning the race overall. After months of rumours, it was official on 10 September 2009 that Boasson Hagen would be joining Team Sky from the 2010 season, along with fellow Norwegians Lars Petter Nordhaug and Kurt Asle Arvesen. 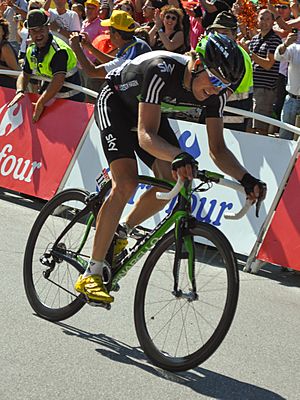 Boasson Hagen at the 2011 Tour de France; he won two stages during the race.

In 2011, Boasson Hagen again finished second in the Tour of Oman, also winning the points jersey for the second year running. Boasson Hagen won the 1st stage of Bayern-Rundfahrt, and went on to win the points jersey, as well as helping team-mate Geraint Thomas win to first overall in the event. He won the Norwegian National Time Trial Championships for the fifth year running in June, but then contracted an illness that put his Tour de France in doubt.

He did recover though, and was given the go-ahead to ride the Tour. He won stage six of the Tour, the first ever victory by a British-registered professional cycling team in the Tour de France. Boasson Hagen finished second to compatriot Thor Hushovd on stage sixteen after the pair were in a three-man breakaway with Ryder Hesjedal. The next day he was again in a breakaway, and broke clear on the final climb of the day to take his second stage win of the Tour. Boasson Hagen finished second to Mark Cavendish on the final stage on the Champs Elysees. In August, Boasson Hagen took a clean sweep of the jerseys at the Eneco Tour, winning the event overall, as well as the points and young riders competitions, and finishing first on the final stage. 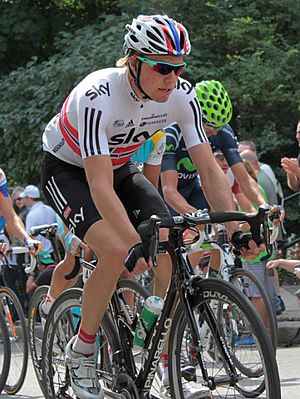 Boasson Hagen began the 2012 season with a second place to André Greipel in the Down Under Classic. After three top-five placings in stage finishes, he took the lead of the sprints classification after the fourth stage of the Tour Down Under and held the jersey until the end of the race. Boasson Hagen took the lead of the Volta ao Algarve after winning the second stage with a well-timed uphill sprint. He lost the race lead to team-mate Richie Porte on the next stage, after setting Porte up on the final climb, but he won the points jersey. He also won a stage of Tirreno–Adriatico, and acted as lead out man for Mark Cavendish. Boasson Hagen had a disappointing classics campaign, failing to post any major results. He did return to form at his home race, the Tour of Norway, winning the race overall, the points and young rider jerseys, and stage four which finished in his home town, Lillehammer. 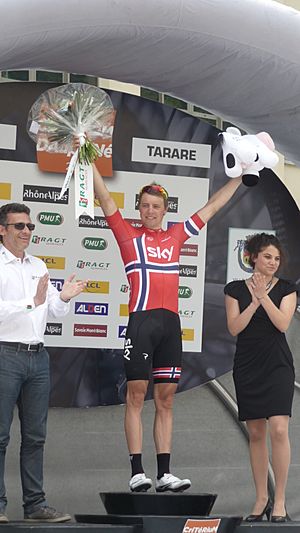 In June 2012, Boasson Hagen won the Norwegian National Road Race Championships to take the national jersey for the first time; he did however lose his time trial national championship jersey to Joker–Merida's Reidar Borgersen. Boasson Hagen was selected in the Sky squad for the Tour de France. He finished fifth in the opening prologue in Liège, then took third on stage one, after bridging across to Peter Sagan and Cancellara in the closing stages, but being unable to beat them both in the sprint. He also finished second to Sagan on stage three, another hilltop finish. At the end of August, Boasson Hagen took the victory in the one day World Tour race the GP Ouest-France. He broke away from the bunch with a little more than two kilometers to go, caught and dropped the remaining man in front, Rui Costa ({{{team name-2012}}}) on the last uphill section and descended to the finish solo. He denied the sprinters in the eighty-man chasing group a chance at victory by holding on to a five-second advantage.

Boasson Hagen began the season with the stated ambition of winning one of the Spring classics, but failed to attain any notable results. However, Boasson Hagen returned to defend his title at the Glava Tour of Norway. After finishing as runner-up in two of the previous sprint stages, Boasson Hagen sparked a two-man breakaway with Sérgio Paulinho to win the fourth stage and consequently both the overall and points classifications. Boasson Hagen would follow this up with a sprint victory on stage three of the Critérium du Dauphiné. He was also named in the startlist for the Tour de France that year but on stage 12 he broke his collarbone in a huge crash ten kilometers from the finish line and was forced to abandon the race. 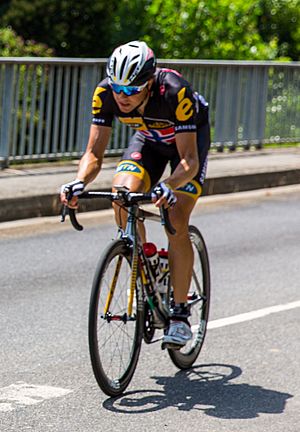 After finishing second overall of the Tour of Norway, Boasson Hagen picked up his first win in two years at the Tour des Fjords, on the last stage of the race. He outsprinted a small leading group of four riders to accomplish the feat. In June, Boasson Hagen won the Norwegian National Time Trial Championships and the Norwegian National Road Race Championships after jumping from the chasing group to join the lead group in the final kilometer. He won the title in a close sprint. In the final kilometers of the UCI Road World Championships, Boasson Hagen refused to cooperate with Greg van Avermaet to close the 10-second gap to later winner Peter Sagan. The most likely reason for Boasson Hagen not to put an effort in the chase was his fellow countryman and sprinter Alexander Kristoff who was in the main peloton just seconds behind the duo. Boasson Hagen eventually finished 20th, just 3 seconds behind the winner.

Boasson Hagen enjoyed a return to form in the early part of the 2016 campaign; taking three stage victories at the Tour of Qatar and Tour of Oman, holding race leader jerseys in both races. He then ended up 5th in Paris-Roubaix after being a part of a five-man group that sprinted for the victory. In the late season, he was 6th at the World Championships in Qatar after not following orders from his team-mate Alexander Kristoff, who finished 7th in the sprint.

Boasson Hagen soloed to victory on stage 19 of the Tour de France, successfully attacking from the breakaway in the final few kilometres. Boasson Hagen, along with Nikias Arndt, took the right side of a roundabout with only 2.2 kilometers remaining, whilst the remainder of the breakaway took the left. The right side of this roundabout ended up being shorter than the left and thus created a gap for the two cyclists. Boasson Hagen was then able to drop Arndt from his wheel to take the victory. This victory marked Boasson Hagen's only triumph at the 2017 Tour de France despite finishing on the podium 5 other times, on stages 7, 11, 14, 16 and 21.

In January Boasson Hagen had his gallbladder removed. He started his season with an appearance at the Volta ao Algarve. In 2018 Boasson Hagen was shut out of world tour victories, only winning on stage 2 of the Tour of Norway and the Norwegian National Championships in the Individual Time Trial event.

In 2019, Boasson Hagen was the only rider on Team Dimension Data's roster to take a victory in a World Tour race, winning stage 1 of the Critérium du Dauphiné.

Participating in his 10th Tour de France, Boasson Hagen only achieved one top 10 finish in the race, finishing 2nd on Stage 7. Boasson Hagen also made headlines in the Tour of Flanders by attacking from the peloton right before a train arrived at a level crossing, holding up the peloton and allowing Boasson Hagen to continue.

All content from Kiddle encyclopedia articles (including the article images and facts) can be freely used under Attribution-ShareAlike license, unless stated otherwise. Cite this article:
Edvald Boasson Hagen Facts for Kids. Kiddle Encyclopedia.