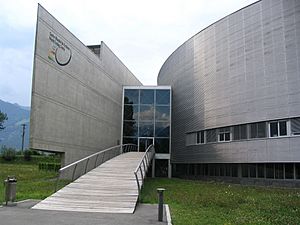 The Union Cycliste Internationale or International Cycling Union usually called the UCI is the governing body of bicycle racing in the world.

It sets out rules for bicycle design, and types of races. The UCI also issues licences to racing teams which gives them permission to compete in one of the ranks or tours.

This is the highest grade, the 20 best teams are in the UCI ProTour, and all of the races are in Europe.

There five Continental Circuits (one each for Europe, Africa, Oceania, Asia, and the Americas). They are the next highest grade after the UCI ProTour. The circuits were designed by UCI to encourage cycle racing outside the European continent, where it is most popular and where the three Grand Tour stage races Vuelta Ciclista a España, Tour de France and the Giro d'Italia are run. The Grand Tours are part of the ProTour

All content from Kiddle encyclopedia articles (including the article images and facts) can be freely used under Attribution-ShareAlike license, unless stated otherwise. Cite this article:
Union Cycliste Internationale Facts for Kids. Kiddle Encyclopedia.