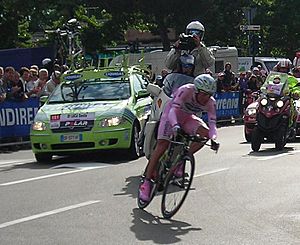 The leader of the race wears the maglia rosa, the pink jersey

The Giro d'Italia, or Tour of Italy, is a famous bicycle race held in Italy, every spring. It is one of the most famous, and best paid bicycle races. The first race was in 1909. It started because the editor of a newspaper called La Gazzetta dello Sport wanted more people to read his newspaper. He planned a race similar to the Tour de France, which had started in 1903.

Winners of the Giro d'Italia

All content from Kiddle encyclopedia articles (including the article images and facts) can be freely used under Attribution-ShareAlike license, unless stated otherwise. Cite this article:
Giro d'Italia Facts for Kids. Kiddle Encyclopedia.