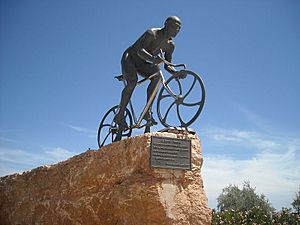 Marco Pantani (13 January 1970 – 14 February 2004) was an Italian professional cyclist. He was born in Cesena, Emilia-Romagna. He was very good at climbing mountains in races. In 1998 he won both the Tour de France and the Giro d'Italia. He was a popular cyclist, and his Italian fans gave him the nickname 'Il Pirata' (the pirate) because of his appearance (he often wore a bandana) and because of his aggressive riding style. He failed a test in the 1999 Giro d'Italia. He returned to cycling, but never won a major race again. In June of 2003 he went into hospital with depression. He died in 2004 in Rimini, Emilia-Romagna. His last entry in his diary read:

For four years I've been in every court, I just lost my desire to be like all the other sportsmen, but cycling has paid and many youngsters have lost their faith in justice. All my colleagues have been humiliated, with TV cameras hidden in their hotel rooms to try and ruin families. How could you not hurt yourself after that?

Other stage races and classics

All content from Kiddle encyclopedia articles (including the article images and facts) can be freely used under Attribution-ShareAlike license, unless stated otherwise. Cite this article:
Marco Pantani Facts for Kids. Kiddle Encyclopedia.