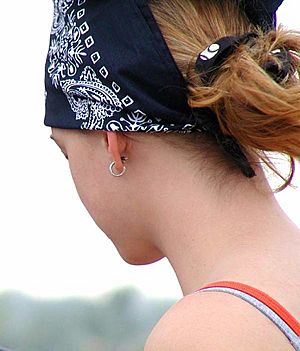 A kerchief (from the French couvre-chef, "cover the head") is a triangular or square piece of cloth tied around the head or around the neck for protective or decorative purposes. A "handkerchief" primarily refers to a napkin made of cloth, used to maintain personal hygiene. A bandanna or bandana (from Hindi बन्धन, bandhana, "to tie") is a type of large, usually colorful, kerchief, usually worn on the head. Bandannas are frequently printed in a paisley pattern.

Certain colors of kerchiefs are associated with gangs making it potentially dangerous to wear different types of them in certain areas. For example, in Los Angeles, California, a red kerchief is associated with Bloods and a blue one is associated with Crips or Sureños. In certain cities such as Richmond, Virginia, non-violent bicycle clubs such as The Loners may wear black and white bandannas to show their association.

All content from Kiddle encyclopedia articles (including the article images and facts) can be freely used under Attribution-ShareAlike license, unless stated otherwise. Cite this article:
Bandana Facts for Kids. Kiddle Encyclopedia.