Gino Bartali Cavaliere di Gran Croce OMRI (18 July 1914 – 5 May 2000), nicknamed Gino the Pious and (in Italy) Ginettaccio, was a champion road cyclist. He was the most renowned Italian cyclist before the Second World War, having won the Giro d'Italia twice (1936, 1937) and the Tour de France in 1938. After the war he added one more victory in each event: the Giro d'Italia in 1946 and the Tour de France in 1948. His second and last Tour de France victory in 1948 gave him the largest gap between victories in the race.

In September 2013, 13 years after his death, Bartali was recognised as a "Righteous Among the Nations" by Yad Vashem for his efforts to aid Jews during World War II. 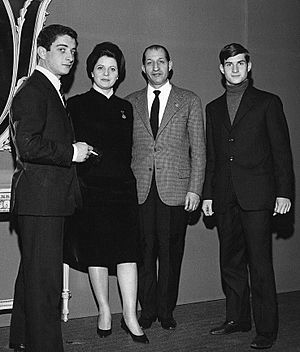 Bartali grew up in a religious family in Tuscany, and his belief earned him the nickname "Gino the Pious". He prayed before meals and resented when teammates swore. In contrast, Coppi grew up in Piedmont in the north and was not religious at all. Bartali was proud that Pope John XXIII had asked him to teach him to ride a bicycle. He made no secret that he supported the Catholic-leaning Christian Democratic Party but his personality ensured that he was forgiven by the rival communists. Tim Hilton wrote: "Bartali was a genuinely religious man, making his devotions public and, in return, becoming the Vatican's favourite sportsman – he was personally blessed by three popes. He would set up shrines in his hotel bedrooms when he rode the Giro and the Tour de France, and, on some mountains, children from summer camps sang canticles as he pedalled past, a priest conducting their infant worship."

Bartali was frequently pessimistic. One of his customary phrases was "Everything's wrong; we'll have to start all over again." The best the historian Pierre Chany could say of him was that while he often boasted of what he had done on mountains when nobody was there to see him, he had the grace never to tell the story differently.

Bartali lived at 173 via Chiantigiana, Florence in a home full of souvenirs. His wife died in 2014 aged 94.

Bartali stopped racing when he was 40, after being injured in a road accident. By then he had lost much of his money. His wealth was "uncertain", said René de Latour.

Bartali had a heart bypass operation and then died of a heart attack in May 2000, having received the last rites 10 days earlier. He left behind his wife, Adriana, two sons and a daughter. The prime minister, Giuliano Amato, sent condolences. Romano Prodi, president of the European Commission, called him "a symbol of the most noble sportsmanship." The Italian National Olympic Committee (CONI) called for two days of mourning and silence was observed before sports events.

All content from Kiddle encyclopedia articles (including the article images and facts) can be freely used under Attribution-ShareAlike license, unless stated otherwise. Cite this article:
Gino Bartali Facts for Kids. Kiddle Encyclopedia.