Nairo Alexander Quintana Rojas, ODB, (born 4 February 1990) is a Colombian professional cyclist. He rides for Team Movistar. He is a specialist climber. In 2014 he won the Giro d'Italia. In 2013 he won the polka dot jersey at the Tour de France. 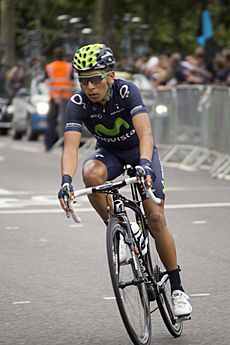 Quintana at the 2013 Tour of Britain

In 2012, he moved to Europe to join the Spanish Movistar Team. He won the Vuelta a Murcia and also won the Critérium du Dauphiné, the Route du Sud and the Giro dell'Emilia. At the Vuelta a Espana, he helped his teammate Alejandro Valverde finish in second place overall.

In 2013, Quintana won the Tour of the Basque Country and the Vuelta a Burgos.

At the 2013 Tour de France, Quintana attacked on the mountain stages and finished second overall. He also won the Young Riders Jersey and the Polka dot jersey competition for the best climber.

He won the Tour de San Luis and came second overall at Tirreno-Adriatico.

Because of the high mountains included in the 2014 Giro d'Italia, Quintana decided to try to win the Giro instead of racing in the Tour de France. He didn't begin the Giro very well, but rode strongly in the final week and won the race. As well as winning overall, Quintana won the white jersey for best young rider.

All content from Kiddle encyclopedia articles (including the article images and facts) can be freely used under Attribution-ShareAlike license, unless stated otherwise. Cite this article:
Nairo Quintana Facts for Kids. Kiddle Encyclopedia.