Boyacá is one of the 32 departments of Colombia. It is in the central northeastern part of the country, almost entirely within the mountains of the Eastern Cordillera to the border with Venezuela, although the western end of the department extends to the Magdalena River. Its capital is Tunja.

Boyacá is known as "The Land of Freedom" because in this region there were several battles that resulted in the independence of Colombia from Spain. 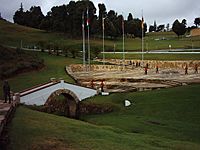 The Puente de Boyacá is one of the most famous places in this department.

The territory of present-day Boyacá was inhabited, during the Pre-Columbian time, by Muisca indigenous peoples. They lived mainly by agriculture and mining gold and emeralds.

The first European to discover the area was the Spaniard Gonzalo Jiménez de Quesada. In 1539, Gonzalo Suárez Rendón, a Spanish colonist, founded the city of Tunja and other places. Tunja became one of the main political and economic centers for the Spanish during the "Viceroyalty of New Granada".

During the 19th century Boyaca was battleground of several important battles during the war of Independence; two of the most important were the "Battle of the Pantano de Vargas" (Vargas Swamp Battle) on 25 July 1819, and the "Battle of Boyacá" on 7 August 1819.

The Boyacá department is in the Andean region over the mountains of the Eastern Cordillera (the eastern section of the Andes in Colombia). It borders 8 departments: Santander and Norte de Santander to the north, Arauca and Casanare to the east, Cundinamarca and Meta to the south, and Caldas and Antioquia to the west. It also borders with Venezuela.

Many rivers start in this area; the most important are the Chicamocha and Arauca rivers, tributaries to other important rivers such as the Magdalena and Meta rivers.

Boyacá also has numerous lakes; the largest, and the largest in Colombia, is the Lake Tota with an area of 55 km2 (21 sq mi).

The area around Tunja, at an altitude of about 2,828 m (9,278 ft), is characterized by climates with few extremes of temperature and ample precipitation in all months. The Köppen climate classification type for the climate at Tunja is a "Marine West Coast Climate" and of the subtype "Cfb".

There are 13 provinces and two special districts in the Boyacá Department, listed below with their 123 municipalities. The provincial capitals are in bold. 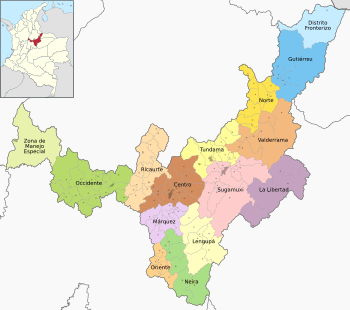 Provinces of the Boyacá department

The inhabitants of the Boyacá department are known, in Spanish, as Boyacense.

The 10 municipalities with more inhabitants in the Boyacá department are:

Farming is an important activity; some crops grown here are sugarcane, coffee and cacao. Cattle raising is also important.

Mining is also an important activity, mainly of emerald and coal.

Some places of interest in the department are:

All content from Kiddle encyclopedia articles (including the article images and facts) can be freely used under Attribution-ShareAlike license, unless stated otherwise. Cite this article:
Boyacá Facts for Kids. Kiddle Encyclopedia.