Anquetil was a smooth rider, a beautiful pedalling machine according to one writer. The American journalist Owen Mulholland wrote:

The sight of Jacques Anquetil on a bicycle gives credence to an idea we Americans find unpalatable, that of a natural aristocracy. From the first day he seriously straddled a top tube, "Anq" had a sense or perfection most riders spend a lifetime searching for. Between 1950, when he rode his first race, and nineteen years later, when he retired, Anquetil had countless frames underneath him, yet that indefinable poise was always there.

Anquetil was fascinated by astronomy and was delighted to meet the cosmonaut Yuri Gagarin. 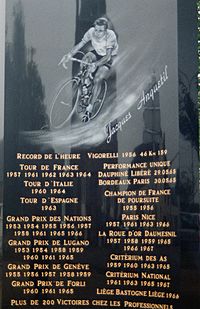 A memorial to Anquetil in Quincampoix, France

Anquetil rode his last race on 27 December 1969 on the track at Antwerp, in Belgium. He retired to become a farmer. The château was surrounded by 170 hectares.

Anquetil became a correspondent in many roles. His radio analyses were considered especially sharp and he gained a notoriety in Belgium for telling Luis Ocaña, the Spanish rider living in France, how to beat the Belgian star Eddy Merckx during the Tour de France.

He rode his bike only three times in retirement, saying he had already ridden enough. He rode the Grand Prix des Gentlemen in Nice, a race in which old riders were paired with current competitors; he went out for an afternoon with friends in Normandy; and he joined his daughter for a bike ride on her birthday. Other than that, he did not ride his bike after 1969.

On 18 November 1987, Jacques Anquetil died of stomach cancer in his sleep at 6 am at the St-Hilaire Clinic in Rouen. He had been there since 10 October. A statement from the clinic said: "His state of health had visibly deteriorated over the last hours and he died in his sleep after showing great courage throughout his illness." Anquetil is buried beside the church in the village of Quincampoix, north of Rouen, where a large black monument by the traffic lights lists all his achievements. There is a further monument at the Piste Municipale track in Paris, where the centre is named after him.

The Jacques Anquetil sports stadium at Quincampoix was dedicated in 1983. There are moves to open a museum in his memory.

All content from Kiddle encyclopedia articles (including the article images and facts) can be freely used under Attribution-ShareAlike license, unless stated otherwise. Cite this article:
Jacques Anquetil Facts for Kids. Kiddle Encyclopedia.