Tour of Flanders facts for kids

When the race began in 1913 the starting city was Ghent with the end of the race in Mariakerke. It has changed twelve times since then. In 2012 the race starts in Bruges and ends in Oudenaarde.

The race has a number of short, sharp hills. The race gives prizes to the first cyclist to go up 17 of these hills. These hills make the race very challenging.

"Looking back, you get a bit nostalgic, but from a competitive point of view, Flanders was one of the most horrible races to ride but one of the greatest races to win." - Sean Kelly 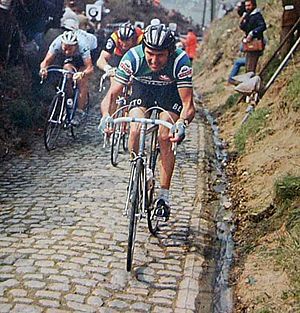 All content from Kiddle encyclopedia articles (including the article images and facts) can be freely used under Attribution-ShareAlike license, unless stated otherwise. Cite this article:
Tour of Flanders Facts for Kids. Kiddle Encyclopedia.