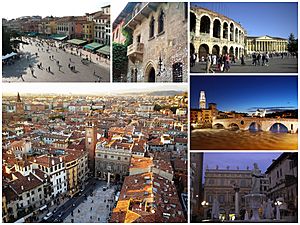 Verona is a city in the Veneto region of Italy with 260,000 inhabitants. It is famous for being the setting for the Shakespeare play Romeo and Juliet and because of the Roman Arena. This city is built on the Adige river. It has a humid subtropical climate (Cfa in the Köppen climate classification).

All content from Kiddle encyclopedia articles (including the article images and facts) can be freely used under Attribution-ShareAlike license, unless stated otherwise. Cite this article:
Verona Facts for Kids. Kiddle Encyclopedia.