Scunthorpe is a town in Lincolnshire, England. It is the administrative centre of the North Lincolnshire unitary authority, and had an estimated total resident population of 65,163 according to the 2011 census. A predominantly industrial town, Scunthorpe, the United Kingdom's largest steel processing centre, is also known as the "Industrial Garden Town". It is the third largest settlement in Lincolnshire, after Lincoln and Grimsby. The Member of Parliament for Scunthorpe is Nic Dakin (Labour).

Scunthorpe as a town came into existence due to the exploitation of the local ironstone resources, and subsequent formation of iron works from the 1850s onwards. The regional population grew from 1,245 in 1851 to 11,167 in 1901 and 45,840 in 1941. During the expansion Scunthorpe expanded to include the former villages of Scunthorpe, Frodingham, Crosby, Brumby and Ashby. Scunthorpe became an urban district in 1891, merged as 'Scunthorpe, Brumby and Frodingham Urban District' in 1919, and became a municipal borough in 1936.

The town appears in the Domesday Book (1086) as Escumesthorpe, which is Old Norse for "Skuma's homestead", a site which is believed to be in the town centre close to where the present-day Market Hill is located.

The skyline of Scunthorpe, August 2016

Scunthorpe is located close to an outcrop of high-lime-content ironstone (~25% iron average) from a seam of the Lias Group strata which dates from the Early Jurassic period and runs north-south through Lincolshire. Ironstone was mined by open cast methods from the 1850s onwards, and by underground mining from the late 1930s. In the 1970s the steel industry in Scunthorpe transitioned to use of ores imported from outside the UK with higher iron content. Underground mining in the area ceased in 1981.

Scunthorpe was close to the epicentre (this was centred at Middle Rasen) of one of the largest earthquakes experienced in the British Isles on 27 February 2008, with a magnitude of 5.2. Significant shocks were felt in Scunthorpe and the surrounding North Lincolnshire area. The main 10-second quake, which struck at 00:56 GMT at a depth of 9.6 mi (15.4 km), was the second largest recorded in the British Isles. In 1984 a quake with a magnitude of 5.4 struck north Wales. 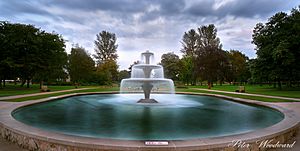 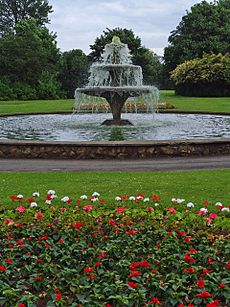 Scunthorpe lies on an escarpment of ridged land (the Lincoln Cliff) which slopes down towards the Trent. The surrounding environs are largely low-lying hills and plains. Although the town itself is heavily industrial it is surrounded by fertile farmland and wooded areas. In terms of general location it lies a mile east of the River Trent, 8 miles (13 km) south of the Humber Estuary, 15 miles (24 km) west of the Lincolnshire Wolds and 25 miles (40 km) north of Lincoln. The town is situated at the terminus of the M181, 42 miles (68 km) from Sheffield. Nearby towns and cities are Hull (18 miles northeast), Doncaster (20 miles west), Grimsby (22 miles east) and York (46 miles northwest). From its position at the heart of North Lincolnshire it is roughly 5 miles (8.0 km) south/south-east to Lincolnshire proper, 10 miles (16 km) west to South Yorkshire, 8 miles (13 km) north by northwest to the East Riding of Yorkshire and 15 miles (24 km) east to North East Lincolnshire

Like most of the United Kingdom, Scunthorpe has an oceanic climate (Köppen: Cfb).

Scunthorpe railway station lies on the South TransPennine Line which has trains from Manchester Airport to Cleethorpes. The town lies five miles (8 km) north of the M180. Before this motorway was opened in 1979, all the east-west goods traffic took the A18 to Grimsby. Humberside Airport is a short drive to the east along the M180. The town's bus station is off Fenton Street. The bus station is predominantly used by Stagecoach in Lincolnshire, that operate services within and out of the town, followed by Hornsby Travel.

Built of Frodingham ironstone, and comprising a nave with five bays and a clerestory, a chancel, north and south aisles, two porches and a tower, it could accommodate up to 500 worshippers. It was designed by J. S. Crowther in the perpendicular style. The original striking clock was installed, in 1890 by William Potts and Sons of the Guildford Clock Works in Leeds. In 1897 quarter chimes were added. The peal of eight bells were hung in 1893, in memory of the Lord St Oswald. The organ, built in London, cost £1,000.

The final church service was held on 29 April 1984 and the building is now an arts centre. 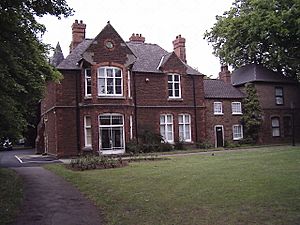 The North Lincolnshire Museum is on Oswald Road, near the railway station. The former church of St John the Evangelist is now the 20–21 Visual Arts Centre. The Plowright Theatre, named after Joan Plowright, is on Laneham Street (off the west end of High Street and also near the railway station). It was built in 1958 as Scunthorpe Civic Theatre. The Baths Hall, reopened in 2011, a 1,700 capacity venue also hosts visiting musical and theatrical events.

The Scunthorpe Co-operative Junior Choir from Scunthorpe won the title of BBC Radio 3 Choir of the Year 2008 at the Grand Finals on 7 December 2008 at the Royal Festival Hall, London. The main choir is made up of 90 members aged between 9 and 19 years whilst also having two training choirs taking children as young as 3 years old. They have made several CDs, perform numerous concerts in the area and further afield, have been subject of documentaries and are internationally renowned as having travelled the world.

All content from Kiddle encyclopedia articles (including the article images and facts) can be freely used under Attribution-ShareAlike license, unless stated otherwise. Cite this article:
Scunthorpe Facts for Kids. Kiddle Encyclopedia.