Whilst his averages suggest he was an average batsman and bowler, they belie his reputation as one of the greatest match winners of the game. He tended to play to extremes, so if Botham played well, he often seemed to win the match on his own.

He was renowned as a big-hitting batsman but with a surprisingly classical technique, and as a fast-medium paced swing bowler. In his later career after a back injury, his pace diminished to no more than a gentle medium, but he seemed to retain the knack of taking wickets regardless.

He is a very popular man in England. One reason for this is that he helped England to beat Australia in a series of test matches called "The Ashes" in 1981. This series is sometimes called "Botham's Ashes". 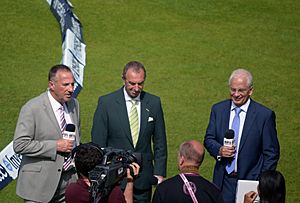 A talented footballer as well as cricketer, Botham had to choose very early in his career whether to play professional football or cricket. Later on, to get fit after an injury, he played for Scunthorpe United. Botham started his first-class career with Somerset in 1974.

He made his Test debut for England on 28 July 1977 in the Third Test against Australia . He played 102 Tests, and was England captain for 12 Tests in 1980 and 1981. However, he was unsuccessful in that role, with 8 draws and 4 losses although in his defence, 9 of his matches as captain were against the best team of the time, the West Indies. 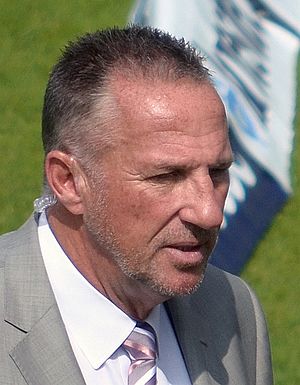 When he retired, he held the world record for the greatest number of Test wickets, although his tally has subsequently been passed by several players.

After retiring as a player, he became an authoritative television commentator and has participated in a number of long-distance fund-raising walks for charities. He has raised more than five million pounds, with leukaemia research amongst the causes which have benefited.

Botham was appointed an OBE in 1992 for services to cricket and for his charity work. For several years, he was a resident team captain on the BBC quiz show "A Question Of Sport", and he has also taken up offers of appearing in pantomimes during the Christmas period. In 2004, he won the BBC Sports Personality of the Year Lifetime Achievement Award.

All content from Kiddle encyclopedia articles (including the article images and facts) can be freely used under Attribution-ShareAlike license, unless stated otherwise. Cite this article:
Ian Botham Facts for Kids. Kiddle Encyclopedia.