The Ashes facts for kids 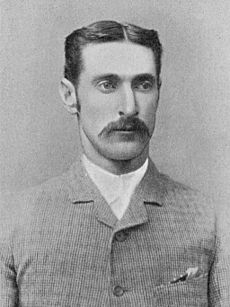 Fred Spofforth, "The Demon Bowler", was instrumental in Australia's 1882 victory over England with 14 wickets for 90.

The Ashes is the symbol of international cricket matches played between England and Australia. The Ashes were supposedly what remained of English cricket after the Australians had beaten them in the first test match played in England.

The name comes from a small pot (known as an "urn") of ashes, which was made and presented to the England captain in 1882. It was based on a joke printed in The Sporting Times, an English newspaper. Someone placed an advertisement in the pages of the paper, describing how English cricket had died and its body had been cremated.

All content from Kiddle encyclopedia articles (including the article images and facts) can be freely used under Attribution-ShareAlike license, unless stated otherwise. Cite this article:
The Ashes Facts for Kids. Kiddle Encyclopedia.