Bellerive Oval (currently known as Blundstone Arena for sponsorship reasons) is a cricket and Australian rules football ground located in Bellerive, a suburb on the eastern shore of Hobart, Tasmania. It is the only venue in Tasmania which hosts international cricket matches, and has a spectator capacity of 19,500.

The venue is best known as the home ground for the state cricket teams, the Tasmanian Tigers and Hobart Hurricanes, as well as a venue for international Test matches since 1989 and one-day matches since 1988. It is also the secondary home ground for AFL club North Melbourne, who play three home games a season at the venue. The stadium has undergone significant redevelopment to accommodate such events. 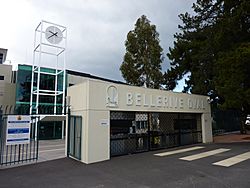 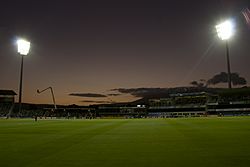 Bellerive Oval with lights on, 2011

Football and cricket first started being played in the area where Bellerive Oval is now in the mid-to-late 19th century. In 1884 the first football match on record from the area was played between Carlton and Bellerive. In 1913 the piece of land located between the now Beach, Church and Derwent streets was sold to the Clarence council. One year later, the new Bellerive recreation ground was ready for use.

The ground barely changed from then until the mid-1980s. During this time the ground had a hump in the centre of the ground making only the top half of players visible from the other side of the ground. There was a shed for players located where the main pavilion now stands. There was a hill on the outer (where the hill now is) that could accommodate two rows of vehicles, the small scoreboard stood on the outer close to where the electronic scoreboard is now, and the time clock sat about halfway up a training light tower. The police booth sat, until very recently, in the north-east corner of the oval. A concrete cricket pitch served for local junior teams until the 1956/57 season, when it was replaced by a turf wicket.

In 1948 The Clarence Football Club, a tenant of the ground, applied to join the Tasmanian Football League, and the ground had to upgrade to TFL standards.

Some minor upgrades were made in the 1960s, clubrooms were built in 1961, and in 1963 a small grandstand (seating about 500) and a new PA system were installed.

In 1977, Tasmania gained admission into the Sheffield Shield and a plan was put in place by the TCA to move from its headquarters at the TCA Ground on the Domain to a new oval. Bellerive Oval was chosen ahead of KGV Oval and North Hobart Oval. $2,200,000 was spent building new grandstands, training nets, a hill, new surface and centre wicket, the old TCA Ground scoreboard was relocated there, and the masterpiece—the three-level Members' Pavilion was constructed.

The newly refurbished ground was opened in 1986 for a TFL Statewide League roster match between Clarence and Hobart, which was won by Clarence before a crowd of 3,562. Significant damage to the newly laid turf resulted in the scheduling of no more football matches for that season.

The move was made in 1987 under TCA Chairman Denis Rogers, in time for its first international match—between Sri Lanka and New Zealand—on 12 January 1988, before a crowd of 6,500.

The first Test match in Tasmania was played at Bellerive from 16–20 December 1989, between Australia and Sri Lanka. Shortly afterwards, the new electronic scoreboard and Northern Stand were erected.

In 2007, the venue saw the Tasmanian Tigers win the state's first Pura Cup, and in 2008 the ground hosted its first Ford Ranger Cup final, also won by Tasmania.

The oval became the first top-class cricket facility in Australia to sign a naming-rights sponsor in October 2011. An agreement with Blundstone Footwear attached the name "Blundstone Arena", which was temporarily discontinued during the ground's use in the 2015 Cricket World Cup. 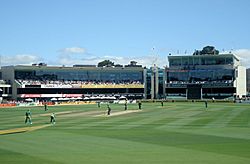 In 1999, the Federal Government announced that it would contribute $5 million to upgrade Bellerive. The TCA added $10 million, on loan from the state government, and the Clarence City Council $1 million, enabling a $16 million upgrade. The first part of this upgrade was the state-of-the-art indoor nets. The 6,000-seat Southern Stand came next, which blocked winds and views of the Derwent, and contained the new media centre. The new Members' Area was the last of the upgrades, along with new perimeter fence and entry gates. The Members' Area features press and radio media areas, corporate boxes and lunchrooms, as well as the players areas, members' bars and TCA offices. The redevelopment was officially opened on 11 January 2003, when an overcrowd of 16,719 (official capacity 16000) witnessed a thrilling one-day match between Australia and England, the victory going to Australia. Tasmanian Tiger Shane Watson became the hero for Australia, bowling the very tense final over.

To allow for day-night matches to be played at the venue, four light towers were installed in 2009 at a cost of A$4.8 million, enabling one-day international (ODI) and Twenty20 cricket matches to be played there. The installation of these lights sparked significant debate from groups both for and against the new towers.

The ground was scheduled for further redevelopment by 2015, with the state government providing $15 million to expand the Southern Stand and Members' Stand, increasing the ground's capacity to over 20,000 for the 2015 Cricket World Cup, along with an Ashes Test in the future, and the possibility of locking-in a long-term commitment for AFL games. AFL Tasmania is also looking at moving its offices to the ground as part of the redevelopment. At the official launch of the renovated stadium, it was announced that the new stand would be named the Ricky Ponting Stand, and the existing Southern Stand would be named the David Boon Stand.

As well as being the home of domestic and international cricket and the Clarence Football Club in the now Tasmanian State League, Bellerive Oval served in 2003 as a home to the Tasmanian Devils in the VFL. The first match attracted the highest VFL roster match crowd since 1986—6,970. The venue also hosted Tasmania's two finals matches, with the elimination win against Geelong (4,800) and 10,073 for a semi-final against Port Melbourne, which was won by Port Melbourne.

In 2010, talk of Melbourne-based Australian Football League (AFL) clubs shifting home games to Bellerive Oval surfaced. Richmond were considered the early front-runners, but by July 2010 North Melbourne became the most likely candidate, given their willingness to move more than just two matches.

On 7 June 2011, the North Melbourne Football Club announced a new three-year deal in partnership with transport company TT-Line, who announced its intent to sponsor North Melbourne home games in Hobart, at Bellerive Oval. From 2012 to 2014, North Melbourne played two home games per year at the venue. The first game was played 8 April 2012 in Round 2, in which North Melbourne defeated the fledgling Greater Western Sydney Giants by 129 points. The original three-year deal was renewed and extended for a further two years, with Hobart City Council and TT-Line (Spirit of Tasmania) agreeing to provide sponsorship for North Melbourne to play three games per year at the venue in 2015 and 2016. A new deal, which did not include the Council, was struck in 2016. The current arrangement, in effect from 2017–2022, allows North Melbourne to continue playing three premiership matches a season at Bellerive Oval. 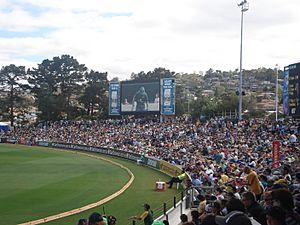 The record attendance at Bellerive Oval since the addition of the Ricky Ponting stand is 18,149 during a 2015–16 BBL match between Hobart Hurricanes and Perth Scorchers on 10 January 2016. The crowd of 17,844 for an AFL game in 2016 between North Melbourne and Richmond on 3 June 2016 is the highest crowd ever at Bellerive Oval for an AFL match.

Metro buses are available to and from Bellerive Oval and there are also ferry services from Hobart City to Bellerive Wharf. Development into an international venue has for outgrown the capacity of local infrastructure to adequately handle the large influxes of patrons attempting to access the venue. In particular, there is little provision for spectator parking. Thus, large numbers of vehicles are parked in the surrounding streets when such events are held, resulting in access issues for local residents and need for traffic-control measures.

All content from Kiddle encyclopedia articles (including the article images and facts) can be freely used under Attribution-ShareAlike license, unless stated otherwise. Cite this article:
Bellerive Oval Facts for Kids. Kiddle Encyclopedia.