Dame Joan Ann Plowright, Baroness Olivier DBE (born 28 October 1929), is an English actress. Her career has spanned over sixty years. She has won two Golden Globe Awards and a Tony Award and has been nominated for an Academy Award, an Emmy and two BAFTA Awards. She was married to the actor Laurence Olivier from 1961 until his death in 1989. 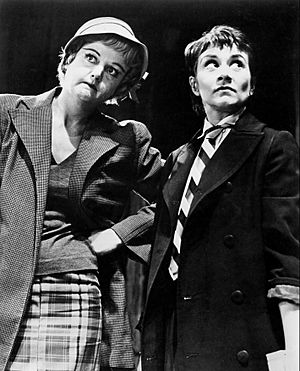 All content from Kiddle encyclopedia articles (including the article images and facts) can be freely used under Attribution-ShareAlike license, unless stated otherwise. Cite this article:
Joan Plowright Facts for Kids. Kiddle Encyclopedia.