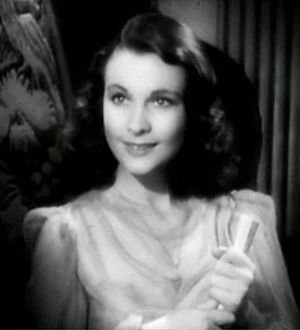 Vivien Leigh (5 November 1913 – 7 July 1967) was an English actress. She is best known for playing Scarlett O'Hara in Gone with the Wind in 1939, and Blanche DuBois in A Streetcar Named Desire in 1951. Leigh won Academy Awards for both of these roles.

Leigh was born in Darjeeling, Bengal, British India. She was married to Laurence Olivier from 1940-1960 and often acted in plays and movies with him. Olivier was Leigh's second husband. The first was Leigh Holman, and Miss Leigh was still legally married to him when she came to the US to accompany Laurence Olivier who came to Hollywood to star in David O. Selznick's production of "Rebecca" directed by Alfred Hitchcock. It was lucky that Miss Leigh's agent just happened to be David O. Selznick's brother, Myron. Miss Leigh wrote long letters to her husband then during the shooting of GWTW, complaining about the script, the change of director from George Cukor to Victor Fleming. The change was made at the insistence of Clark Gable, who felt that Cukor was devoting too much time and attention to directing Miss Leigh and her co-star, Olivia de Havilland. Miss Leigh also complained in her letters of Gable's bad breath due to his dentures.

When her divorce was final, she married Olivier (she referred to him as her husband until she died, although they had been divorced for many years). Leigh believed that Olivier was the best actor of his (or any) generation, and worked very hard to be worthy of acting with him - on stage, of course. Leigh believed, as did Olivier, that the only place "real" acting took place was on the stage. Her movie career reflects her lack of enthusiasm for that medium, concentrating instead on acting with Lord Olivier in live theatre. Many critics, however, did not feel that she had the "presence" and vocal prowess that Olivier possessed and her reviews were often (perhaps unfairly) negatively compared to her husband.

Leigh was considered to be beautiful and this sometimes meant that she thought that she was not taken seriously as an actress. However her ill health was often a bigger problem. Leigh suffered from bipolar disorder and often had tuberculosis. These meant that her career went through period of decline and that she was sometimes considered difficult to work with. She died of tuberculosis in London.

All content from Kiddle encyclopedia articles (including the article images and facts) can be freely used under Attribution-ShareAlike license, unless stated otherwise. Cite this article:
Vivien Leigh Facts for Kids. Kiddle Encyclopedia.