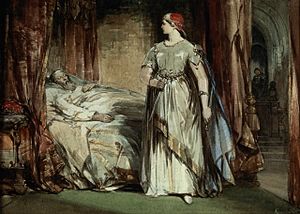 Lady Macbeth is a fictional character in William Shakespeare's play Macbeth (c.1603–1607). She is the wife to the play's main character, Macbeth, a Scottish nobleman. After talking him into killing the king, she becomes Queen of Scotland. Later, she feels bad about her part in the crime. She dies off-stage in the last act.

The idea for the character came from Kings Duff and Duncan in Holinshed's Chronicles (1587), a history of Britain familiar to Shakespeare. Shakespeare's Lady Macbeth appears to be made up of two personalities in Holinshed's work. These are Donwald's nagging, murderous wife in the account of King Duff and Macbeth's ambitious wife in the account of King Duncan.

All content from Kiddle encyclopedia articles (including the article images and facts) can be freely used under Attribution-ShareAlike license, unless stated otherwise. Cite this article:
Lady Macbeth Facts for Kids. Kiddle Encyclopedia.